When my fourth-born suggested, "Hey, Mom, wanna go to the beach to celebrate the perihelion?", my first response was, "Sure!"

My second response: "What the heck is a perihelion?"

And thirdly, I asked the most crucial and prophetic question of the day: "Should we bring Ranger?"

A perihelion, I soon learned, is the day of the year in which the earth is closest to the sun.
No, we are not at the exact same distance all year long. Because the earth's orbit is an ellipse, rather than a perfect circle, the distance varies by a few million kilometers, give or take.

Similarly, a beach romp can vary by a few million interruptions, give or take, depending on whether Ranger comes along. Knowing full well what drama awaited me, I invited my Irish gentleman to come along on our outing to Picnic Point Beach. 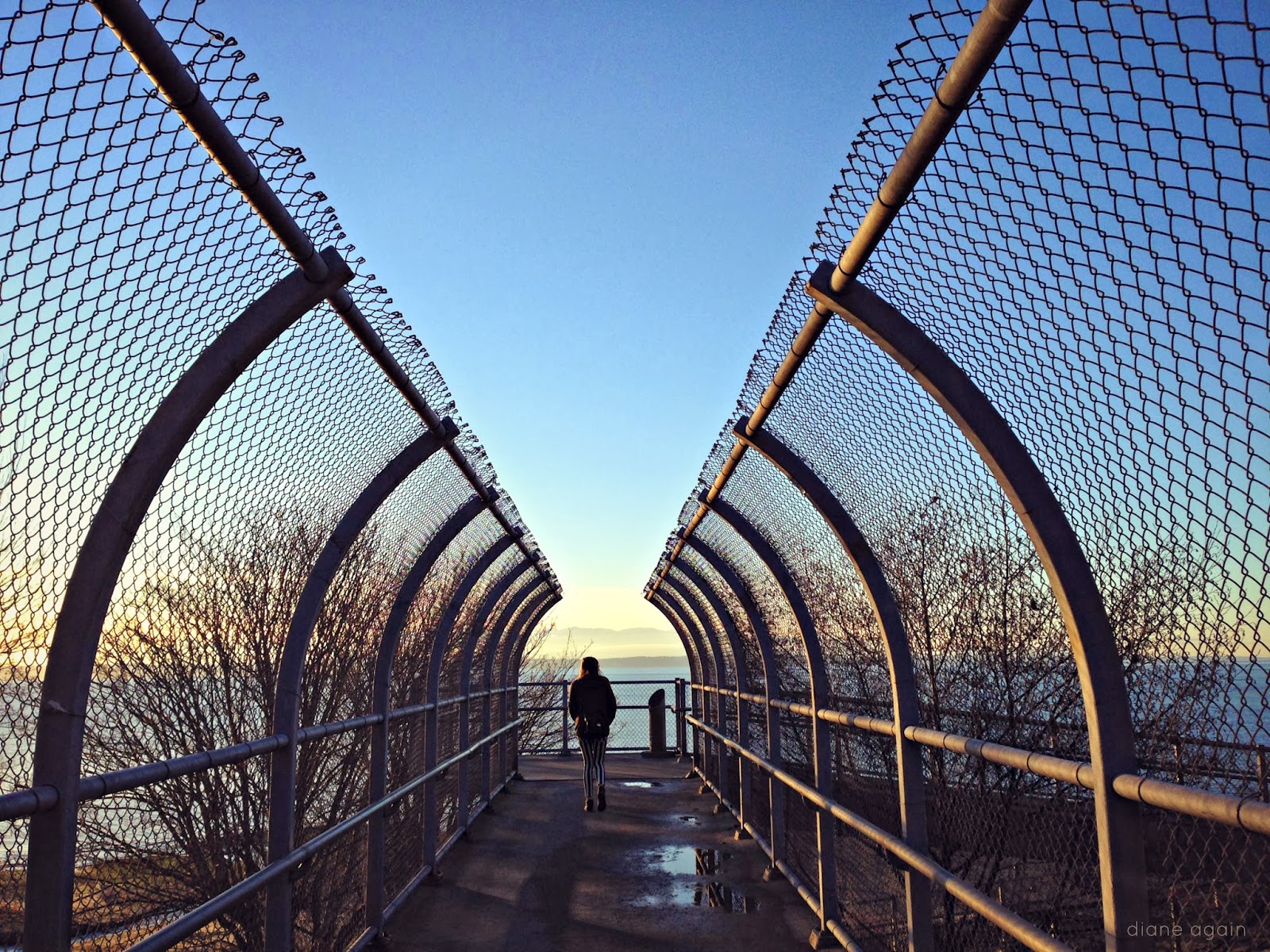 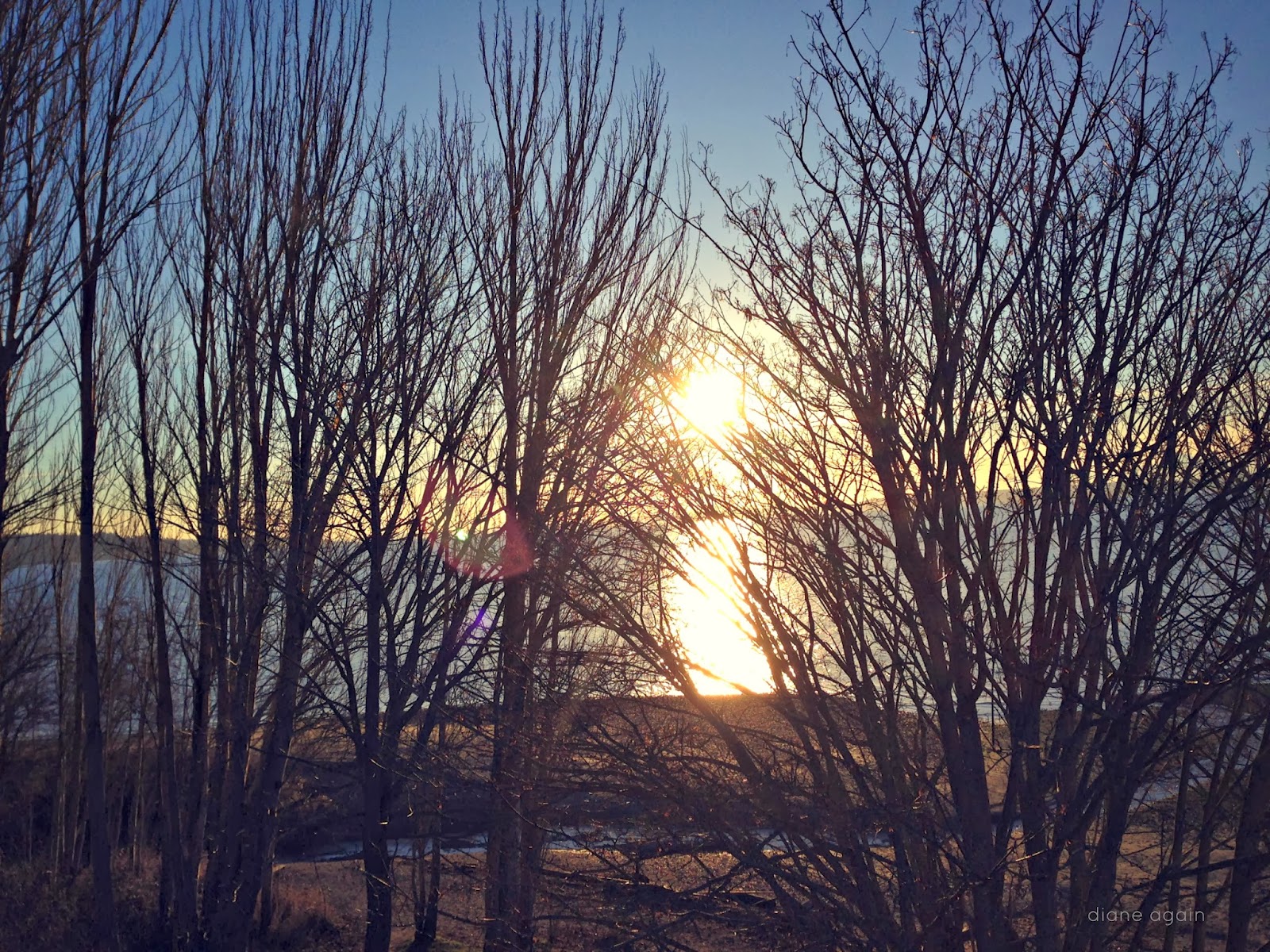 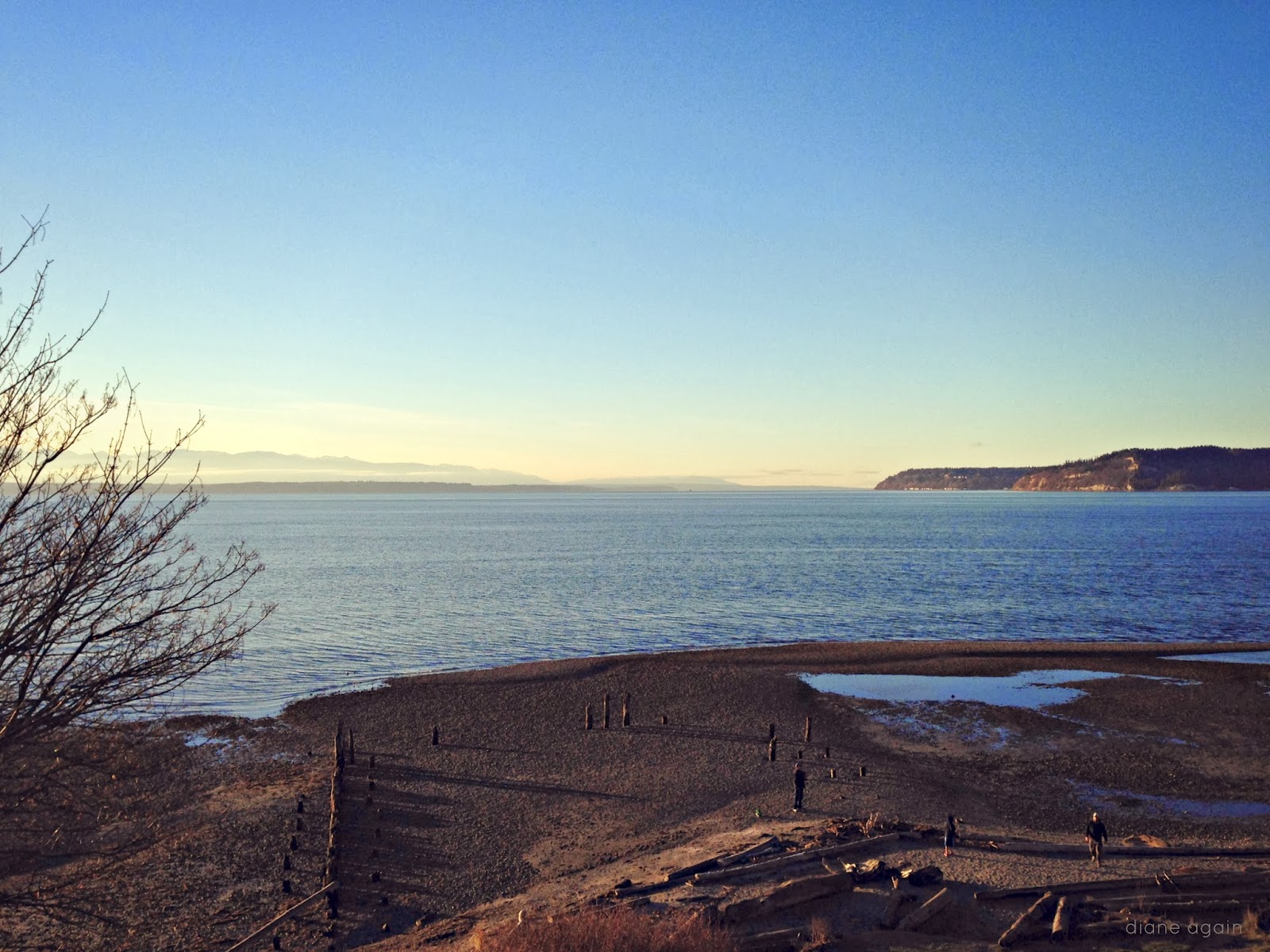 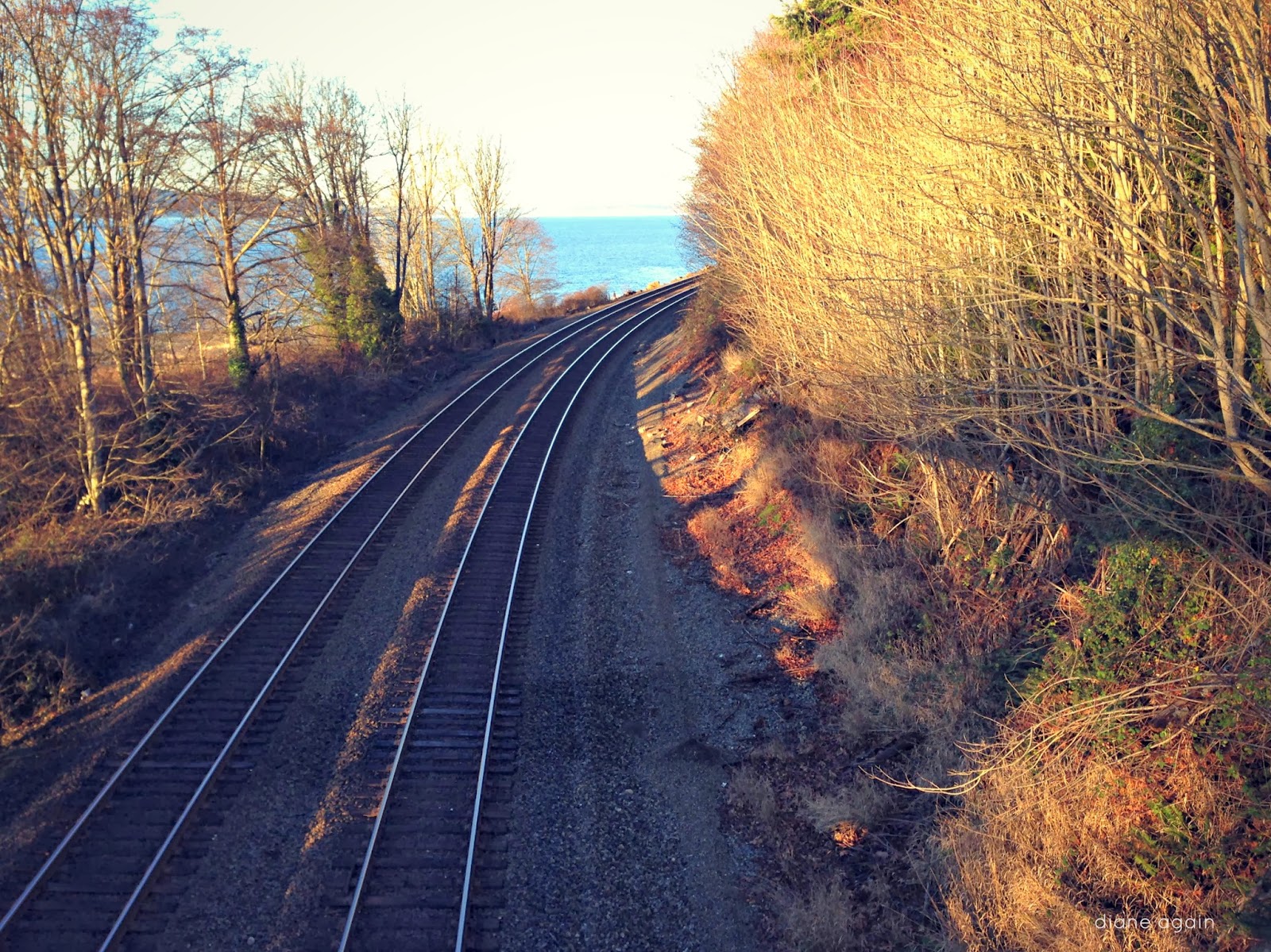 ^ This quiet little county park, just a few miles from my home, has a fun feature sure to interest most visitors: a pedestrian bridge over a set of busy train tracks. From this lovely height, one can take in the layout of the park, with its picnic areas, abandoned pier posts, and lazy creek working toward Puget Sound.

However, Ranger is never delighted with this airborne adventure. Slung low to the walkway, tail between his legs and ears drooped in submissive terror, he inched his way along the bridge and ramps, fearing for his life. Despite my instructions for him to walk at my side, on the right side of the walkway so that others can pass by, he insisted on staying smack dab in the middle. Too scary near the edges, where he can see the ground far below. Whenever I paused in my progress, he interpreted that as a sign to beat a hasty retreat, and reversed direction, hoping to escape this horror.

It took quite an effort of coaxing the poor dog along, step by step, in order to convince him to cross the bridge. I suppose he may have felt demoralized by the fact that my daughter and I were rolling with laughter at his panic-stricken behavior, but we couldn't help ourselves. 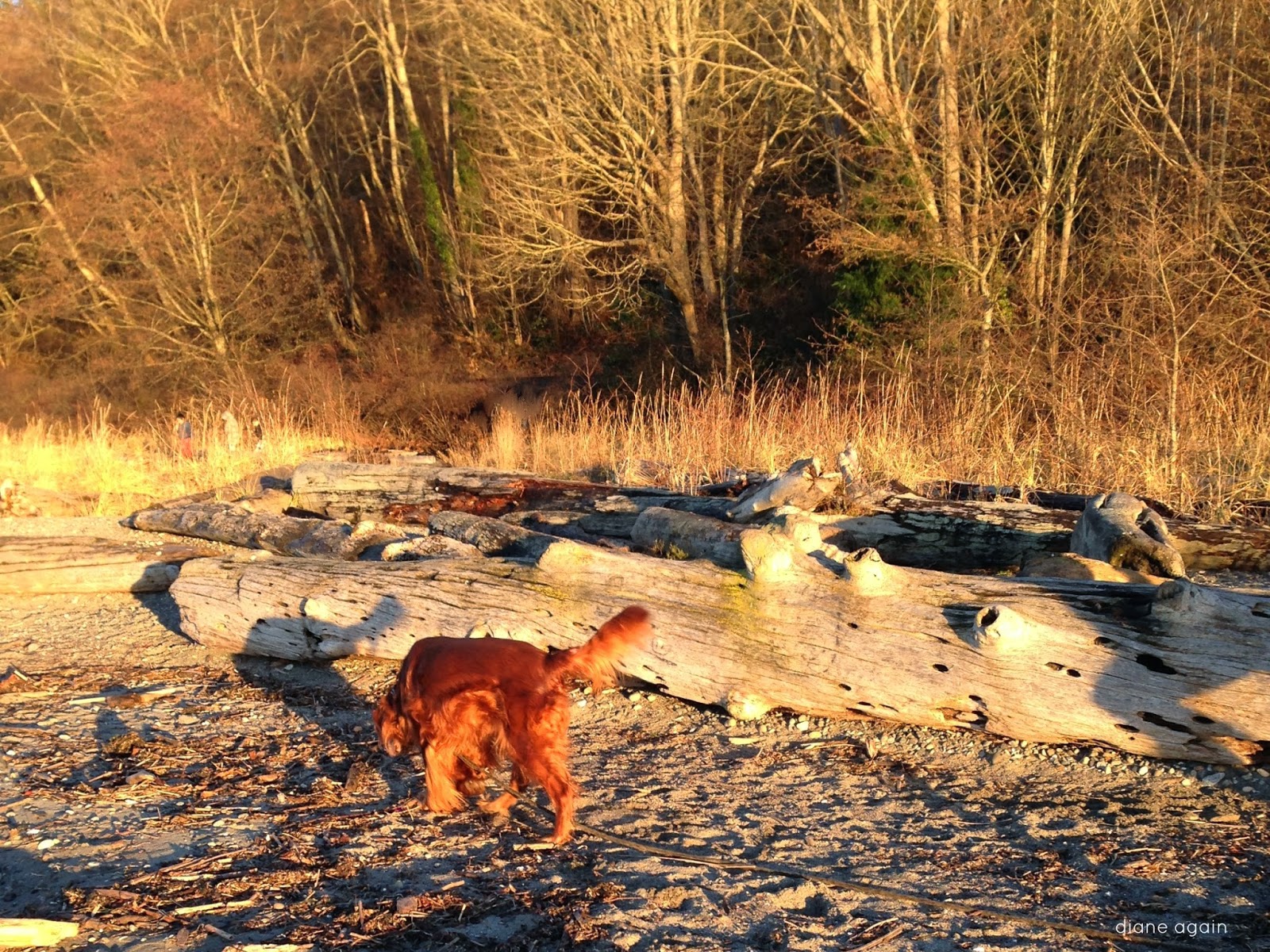 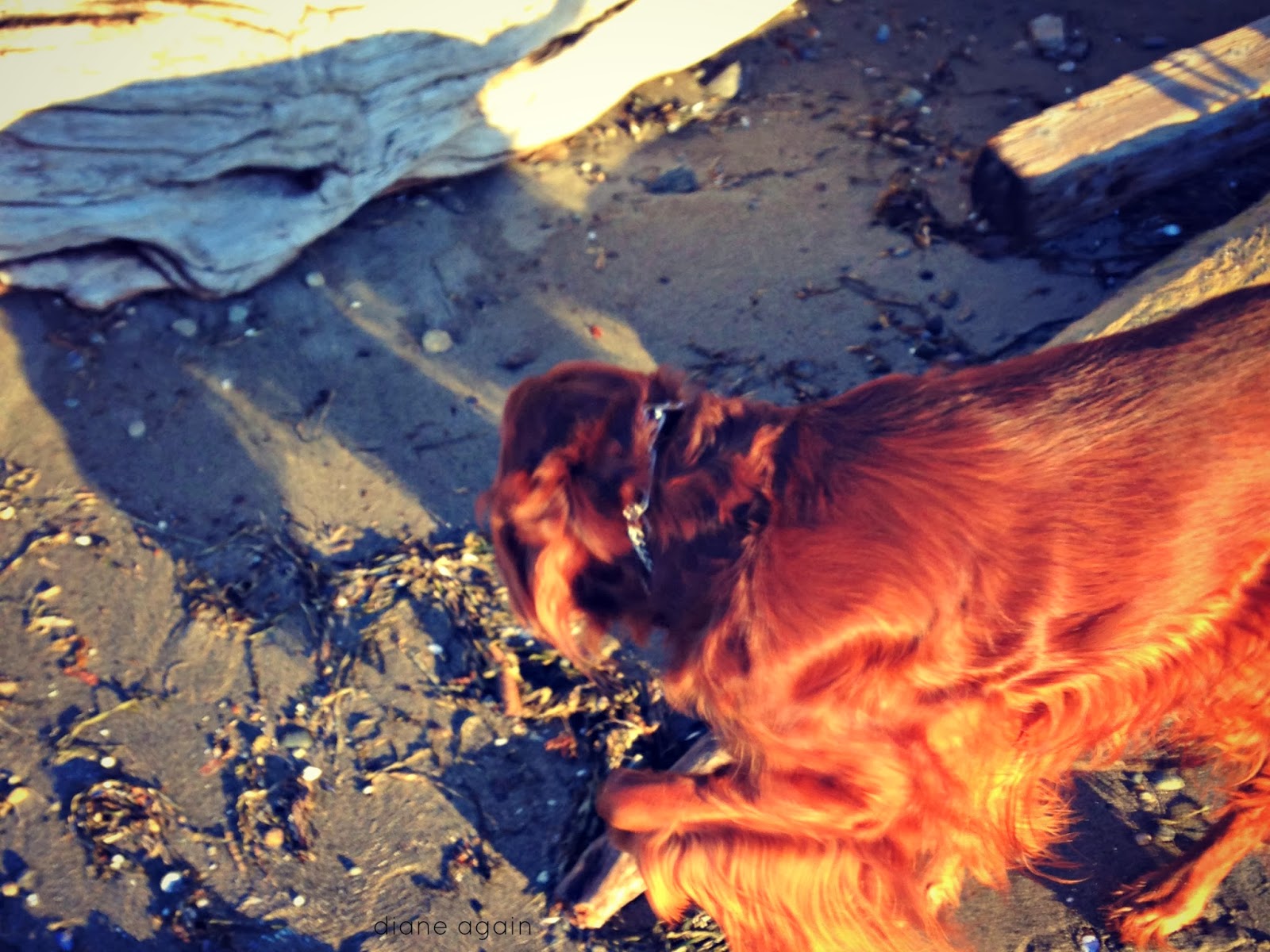 ^ Finally back on terra firma, Ranger regained his joie de vivre and headed straight for the beach logs.

Never mind that I prefer to walk at water's edge.

Never mind that his long leash snagged on the various rocks and logs, requiring constant attention and adjustments from me.

Never mind that other beachgoers had made encampments among the logs, and Ranger would have gladly paid them an up-close-and-personal visit if I weren't there to reel him in.

I was just glad to have my cheerful dog back, and happy to be walking in the sunshine. 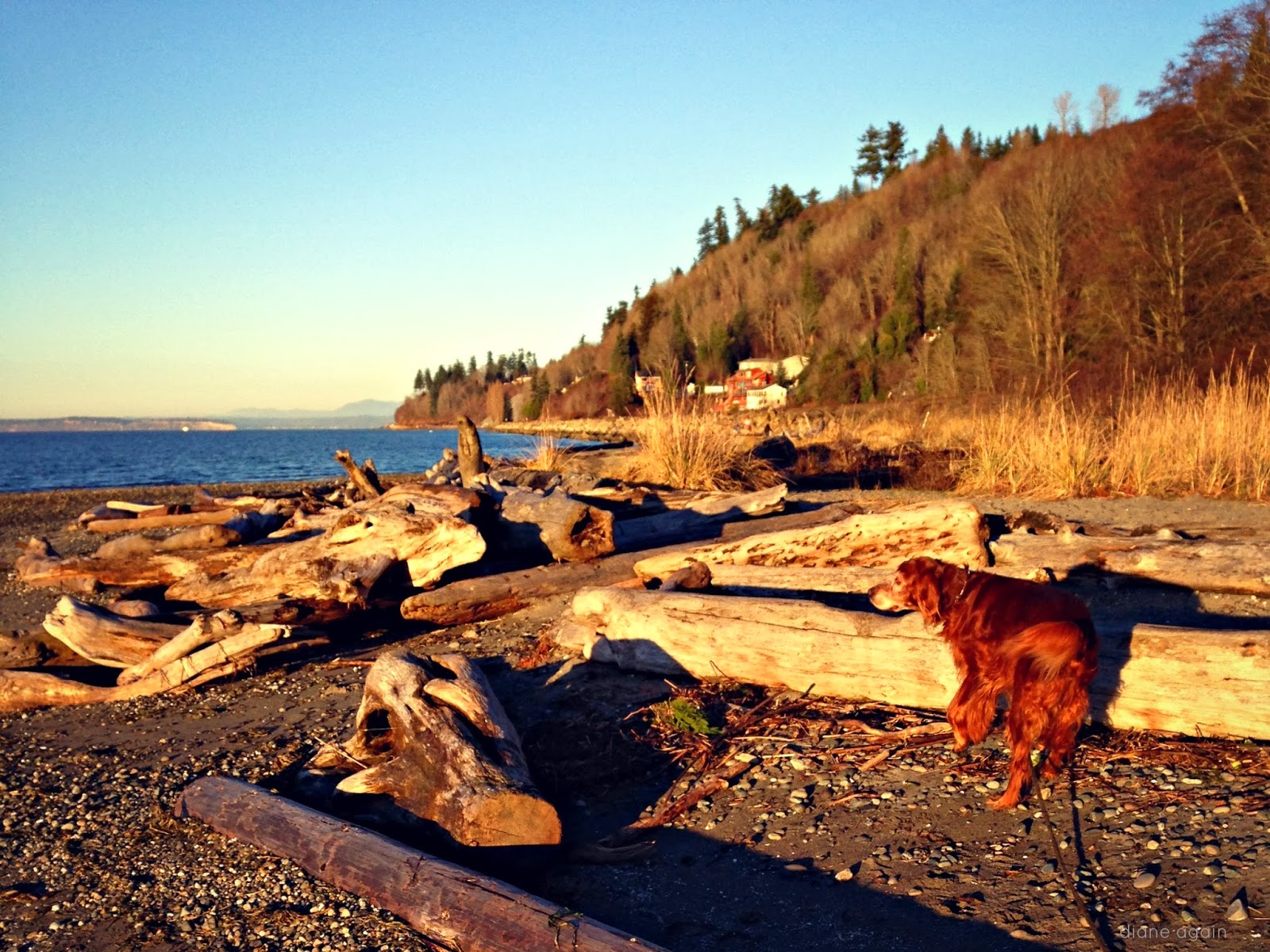 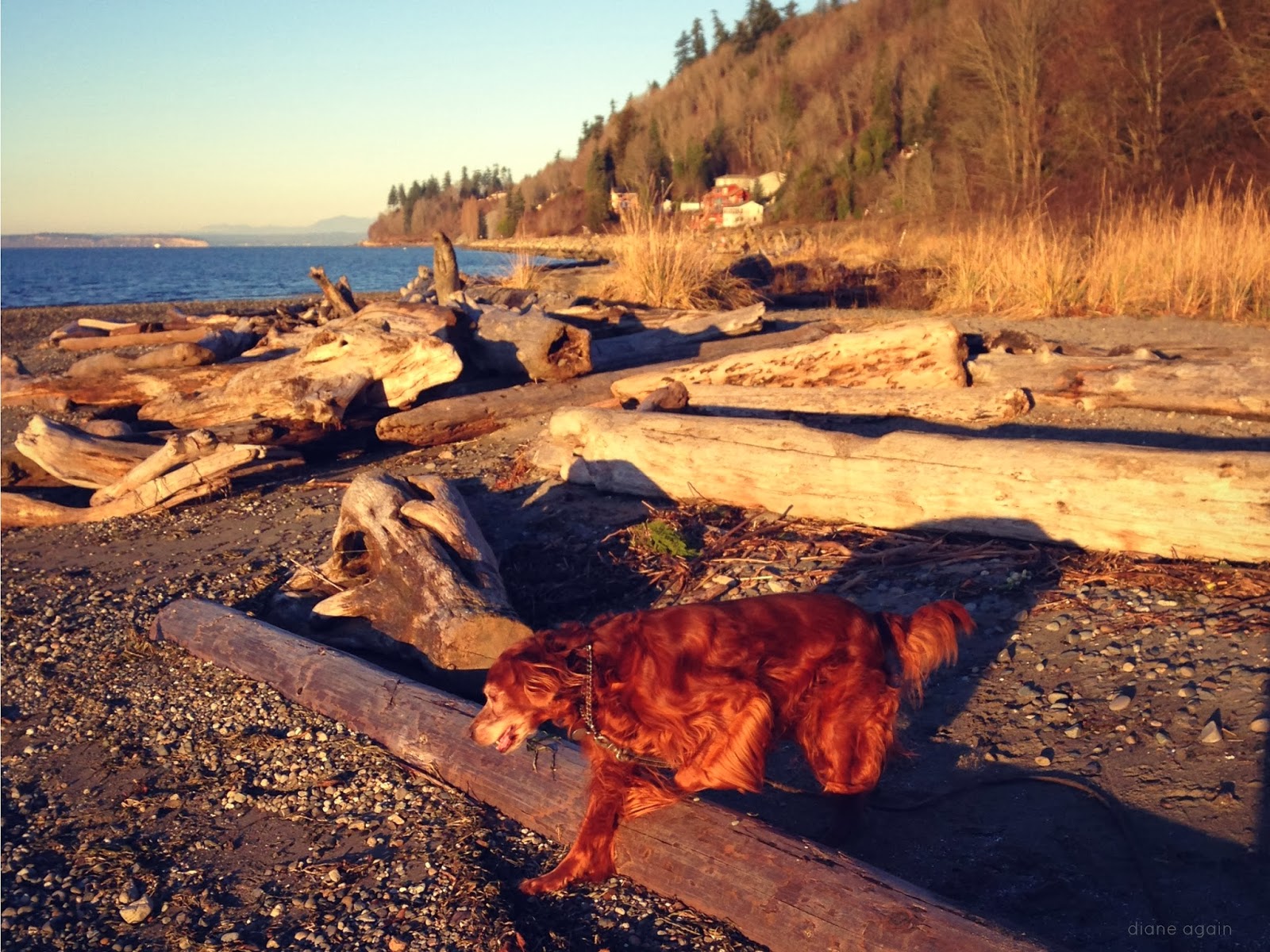 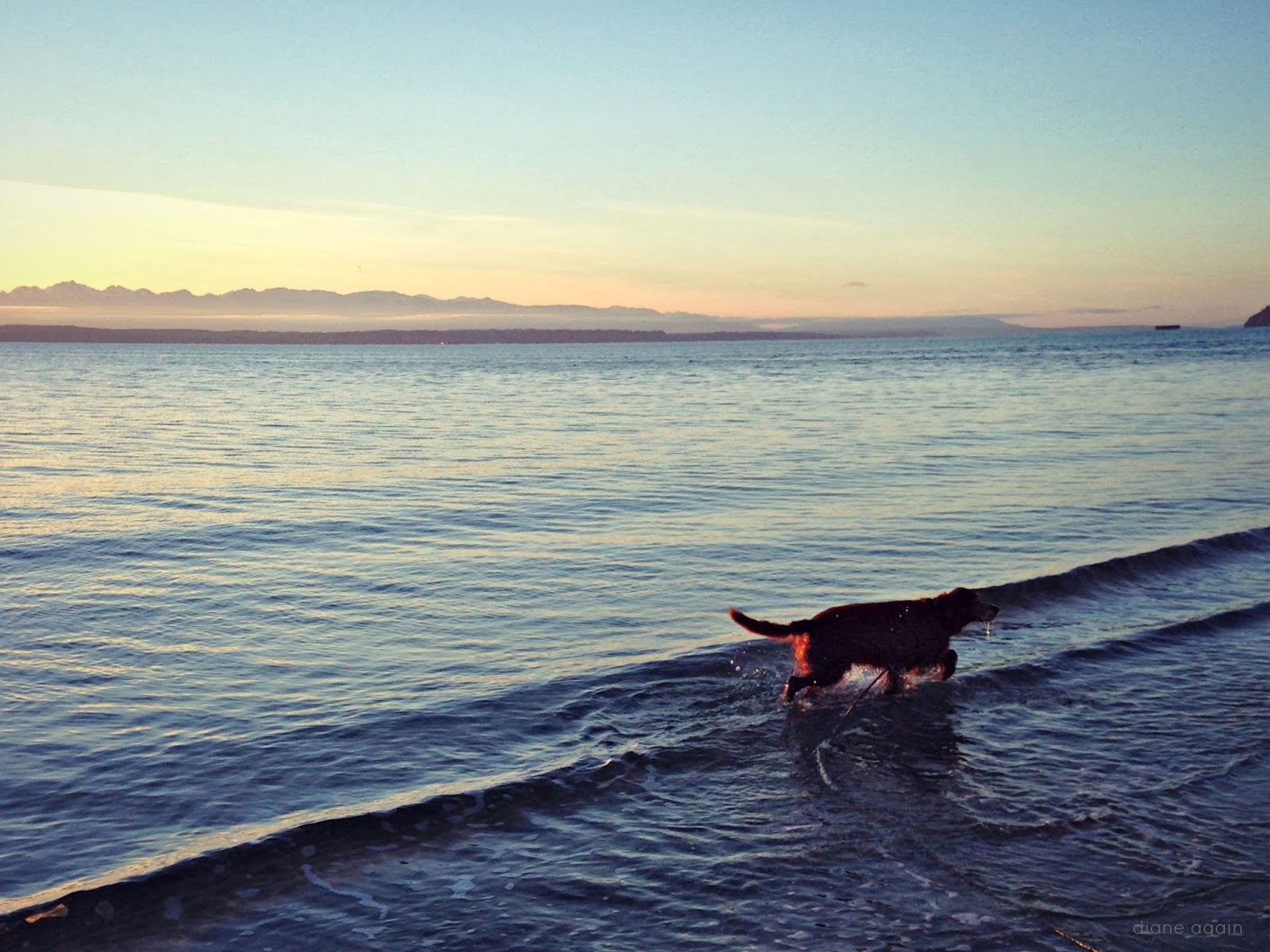 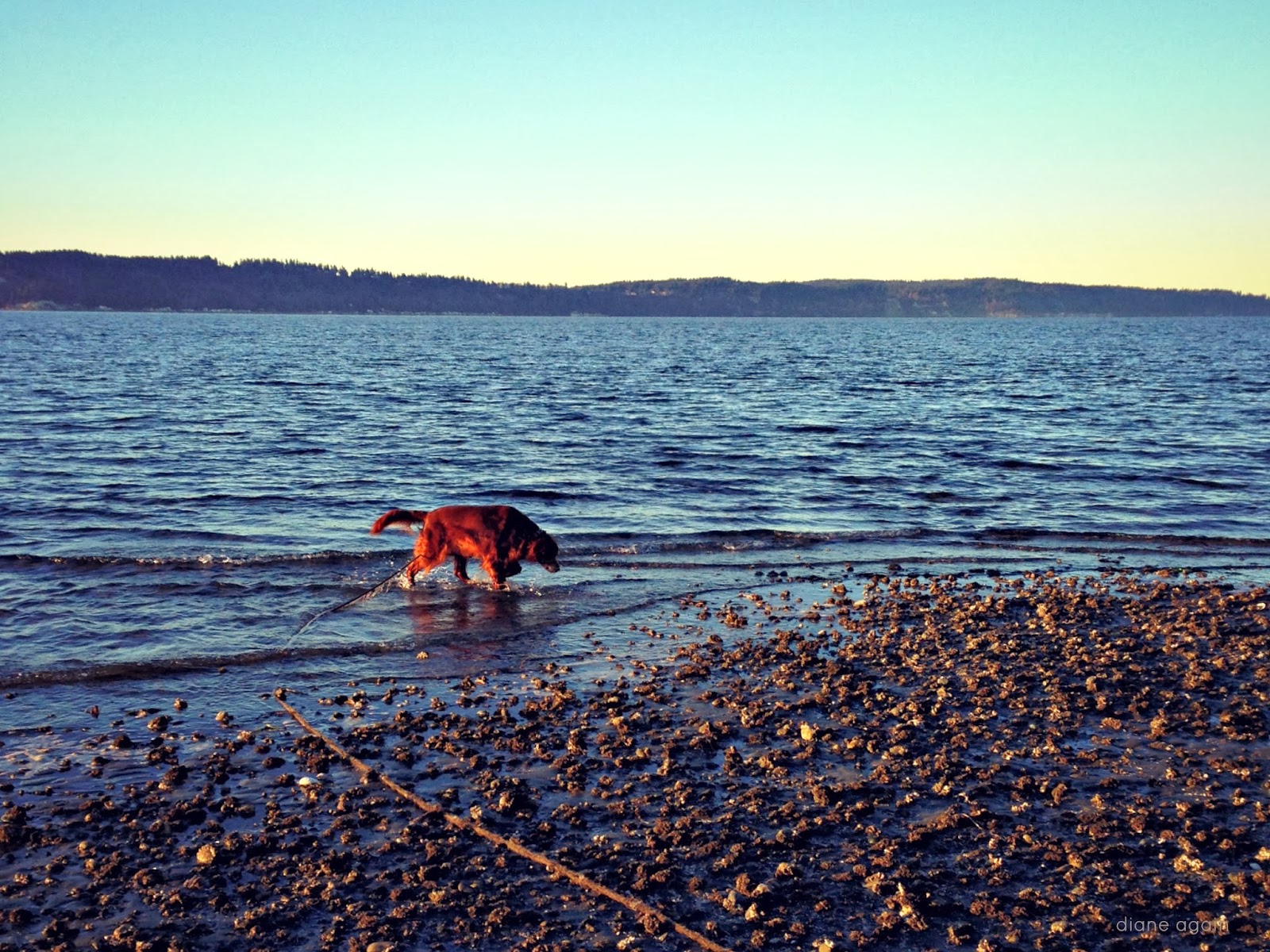 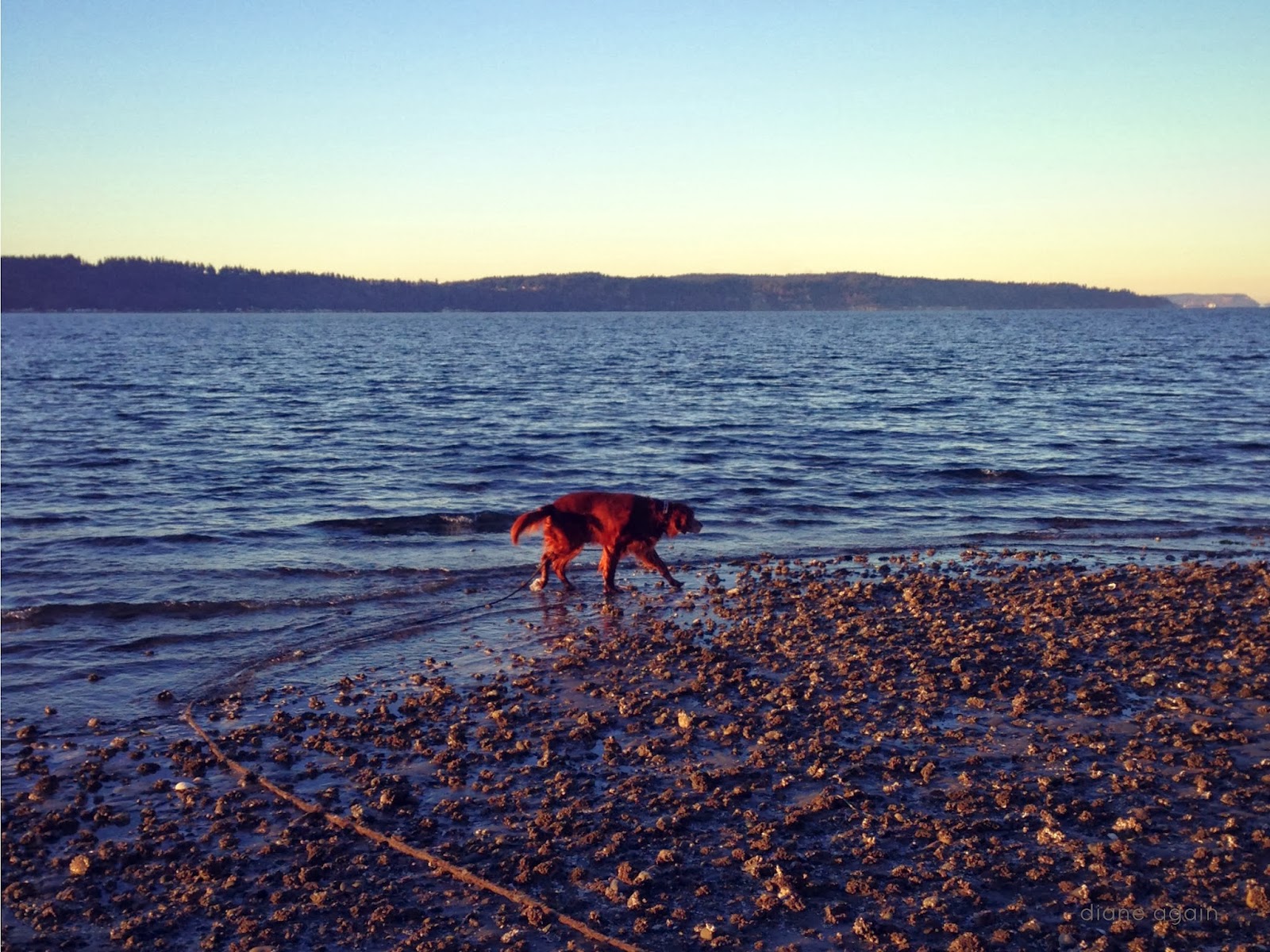 ^ Technically, Ranger doesn't swim. He strolls around in the frigid water, never venturing out past his chest, lapping up the salty brine and refreshing himself.

Meanwhile, I stumbled through the barnacle-covered rocks, testing the waterproof capacity of my boots (they failed) and trying not to soak my gloves with that sopping wet, icy cold leash. 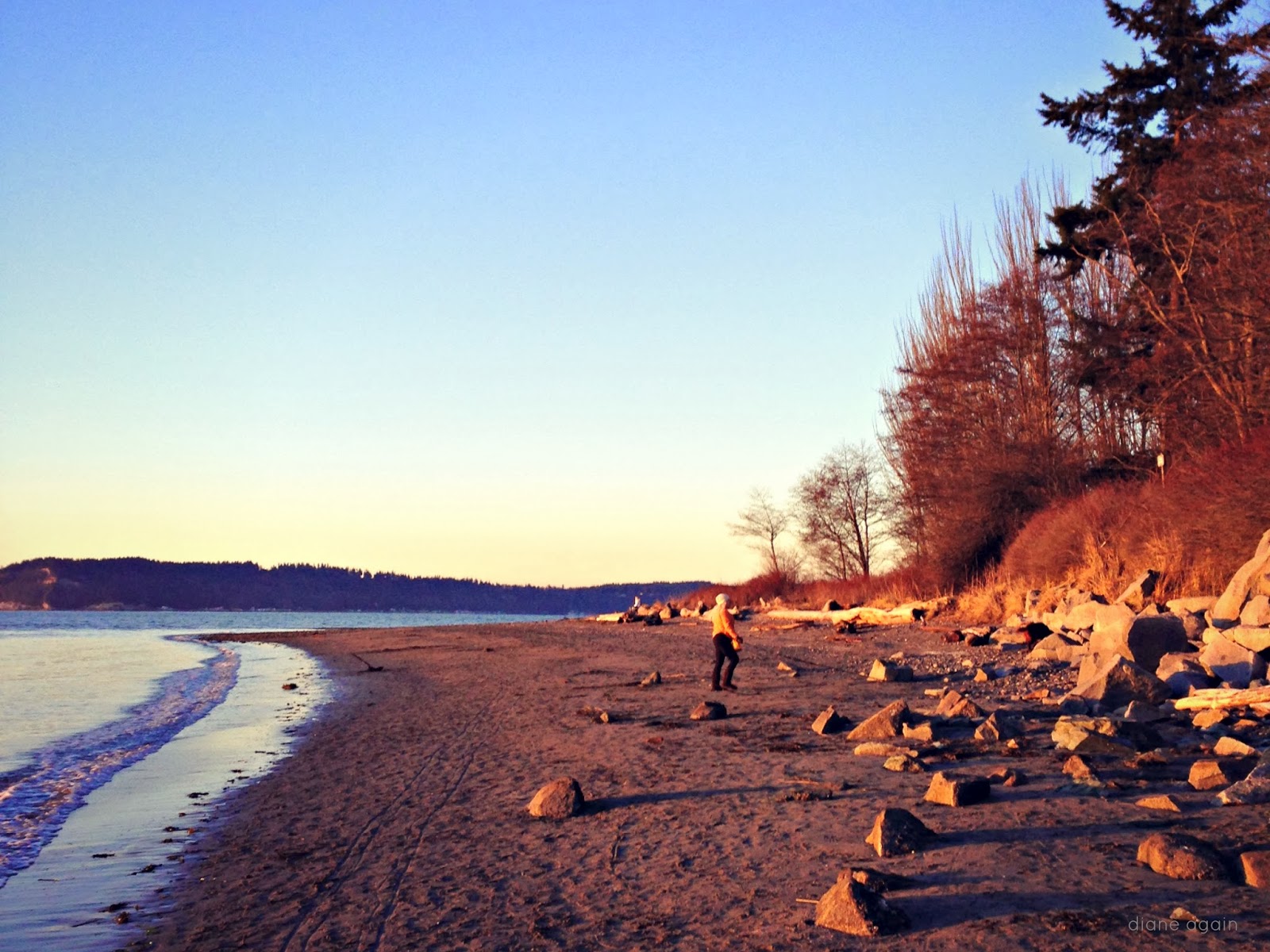 ^ After his swim, Ranger was ready for more sniffing action. We spent a lot of time in this field of boulders and he lifted his leg to approximately 87% of them. I waited patiently while he explored, unwinding his rope from a few trillion tangles. 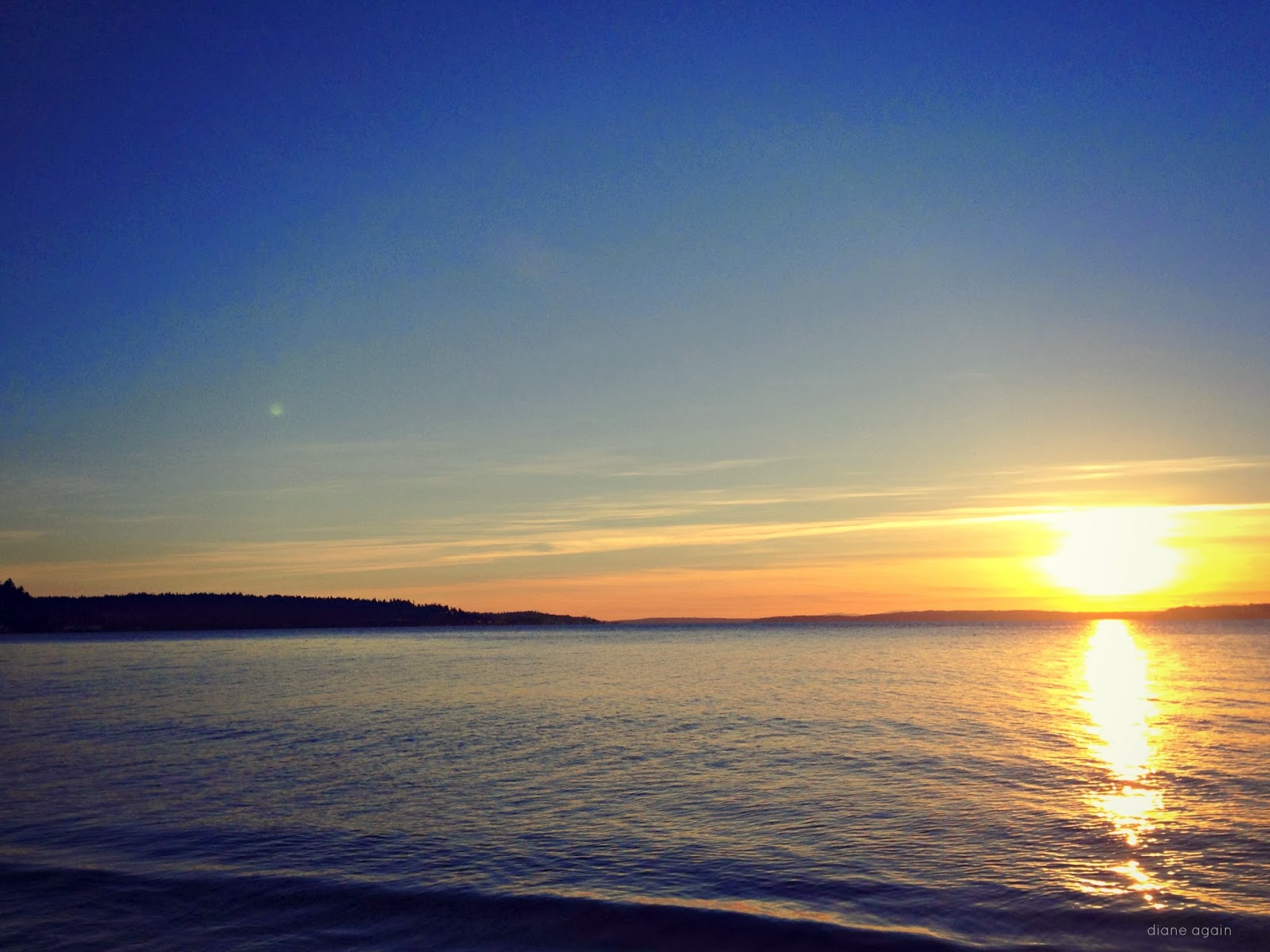 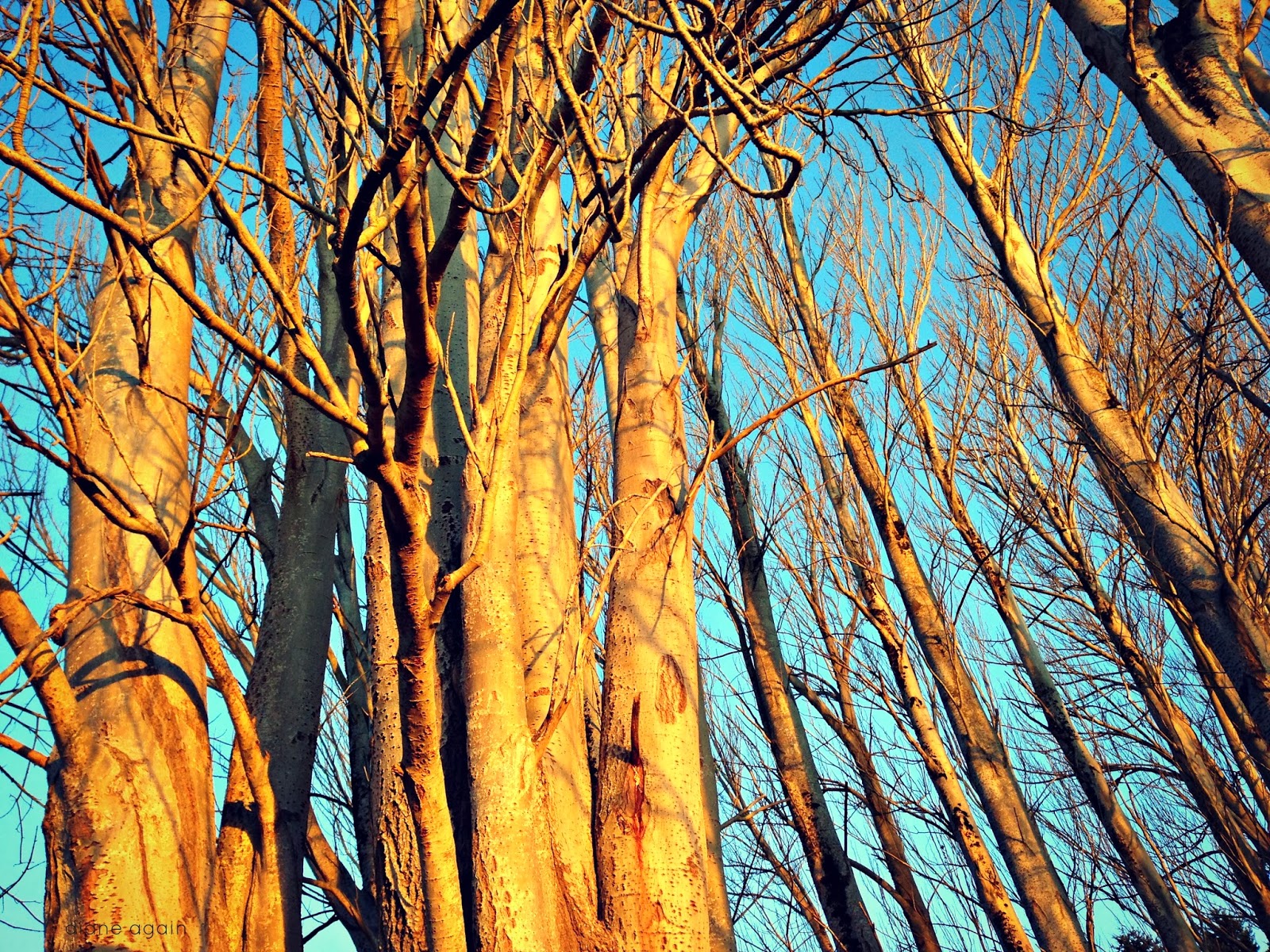 ^ While I attended to Ranger's needs, my daughter took my phone and snapped most of these pictures for me. She wandered peacefully along the shore, contemplating the angle of the sun, the phase of the moon, and all the other fascinating thoughts that rattle around in the brain of a student astronomer. 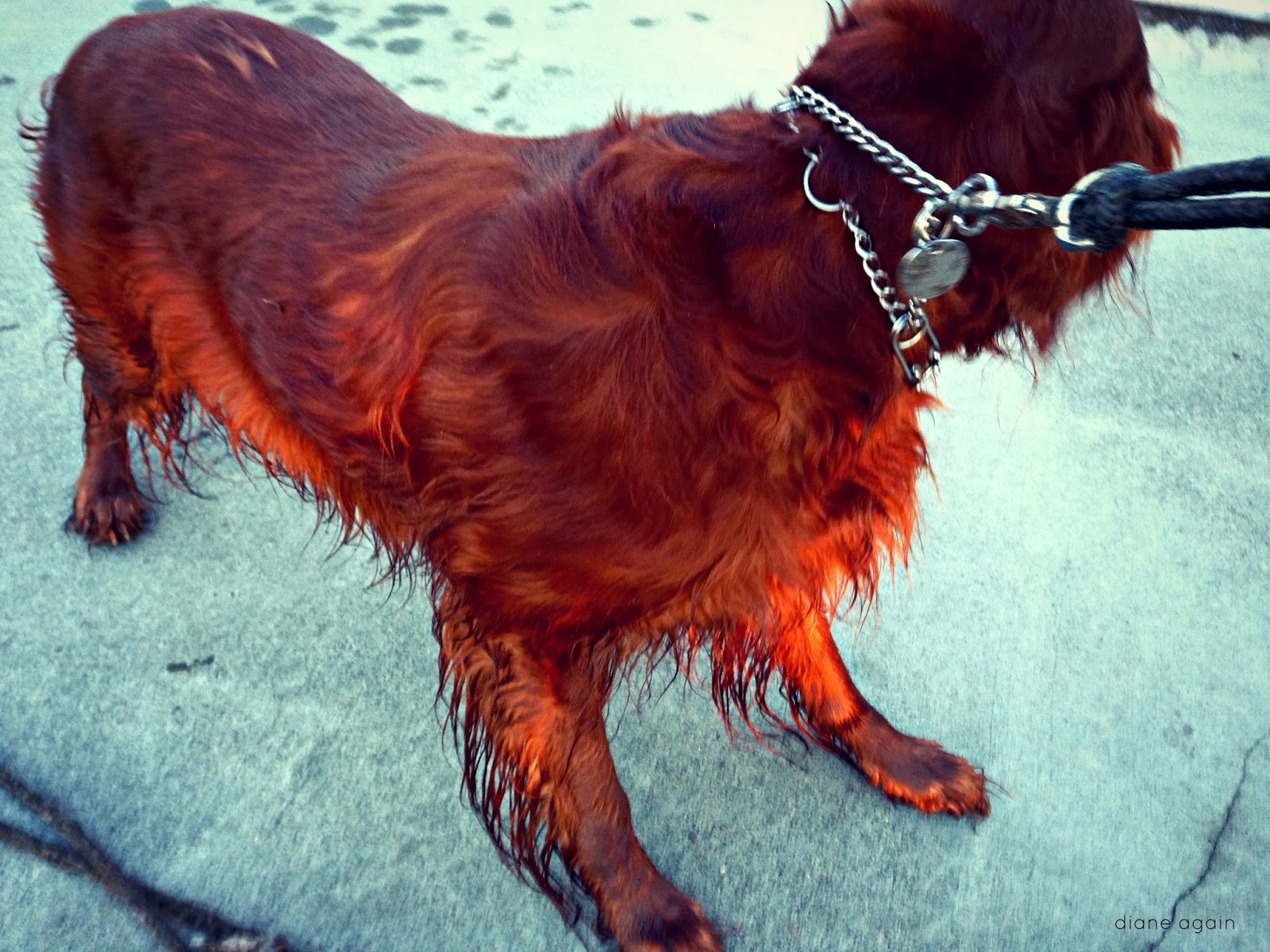 ^ When she had drunk her fill of the beauty, and Ranger's coat has absorbed the maximum levels of water and sand, we headed back to the car. Up and over the pedestrian walkway, Ranger had another fit of fear.

This time, we tried to catch a few shots of his unbridled panic - it's hard to see the protest in his body language here, but in person, the effect was comical. Once we wiped away our second set of laughter-induced tears, I dragged all seventy, soaking wet and sand-covered pounds of my baby boy across the bridge and tossed him into the car. 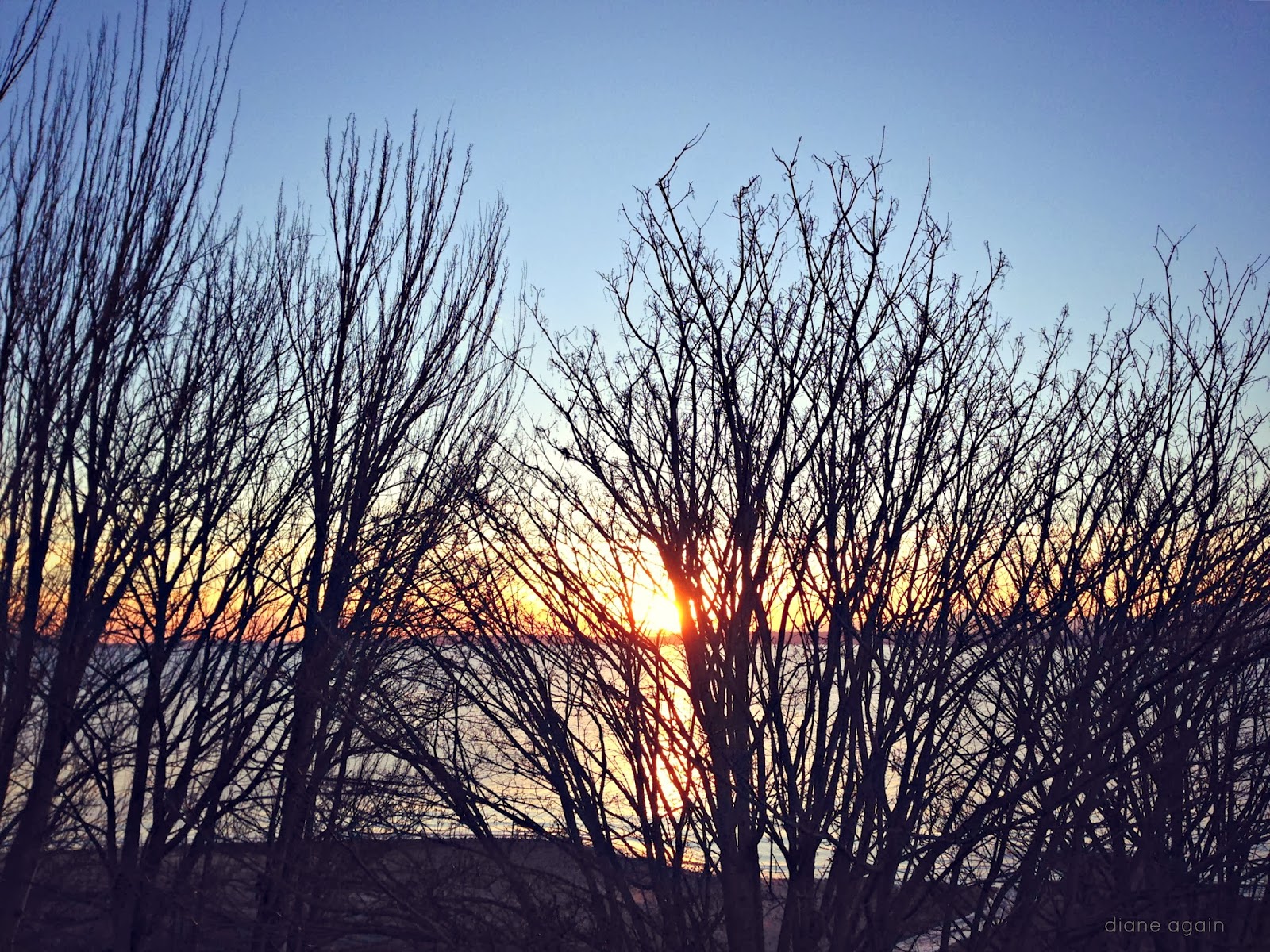 ^ I beat the sand off my own clothing, wrapped up the soaking, muddy rope, took a deep, cleansing breath and drove the car out of the parking lot. As we wound up through the ravine towards home, I suddenly remembered. The perihelion! In all the chaos of Ranger's antics, I completely forgot about the astronomical significance of our visit, and even though the effect is not visible to the naked eye, I had not given a moment's thought to the sun's unusual proximity.

But then I glanced in the back seat. My big, wet, sandy red dog was curled up in a tight, cozy circle on the back seat, his sweet eyes shut, breathing slow and contentedly as he already drifted toward a nap.

Bless him. Bless every one of the bazillion interruptions he inflicted on me during our visit to the beach. And while I may have missed out on the full effect of the sun's special day, I'm still very glad that I brought good ol' Ranger to the beach.
Posted by Diane Streicher @ Diane Again at 11:29 PM

Email ThisBlogThis!Share to TwitterShare to FacebookShare to Pinterest
Labels: Pet Love, Seasons and Celebrations, Travels Near and Far