Yesterday I went on an adventure and returned with two stories about spit.

In my first story, spit is a place. Yes, it is.

A spit is basically a long, skinny sand bar. Spits are formed along coastlines when tides push just so against the mainlands, and not far from my home, there is a big one.

I wish I could say it's within spitting distance, but alas, I can't.

It's about two and a half hours away. But my youngest and I were bound and determined to hike the length of Dungeness Spit. So first we boarded a ferry, and sailed across Puget Sound to the peninsula. 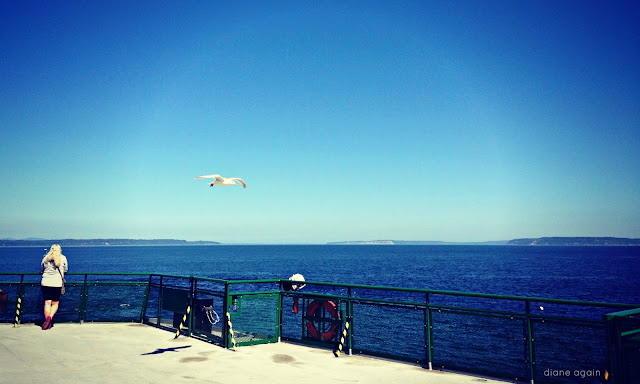 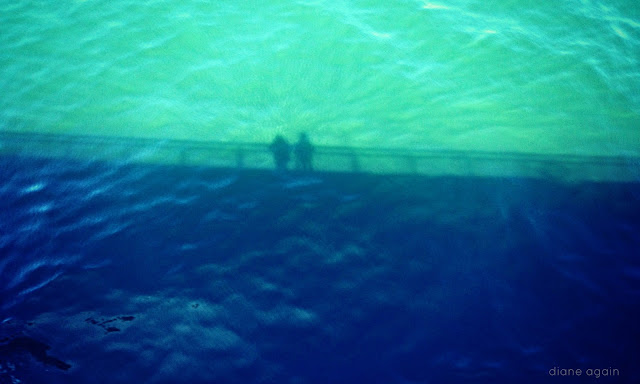 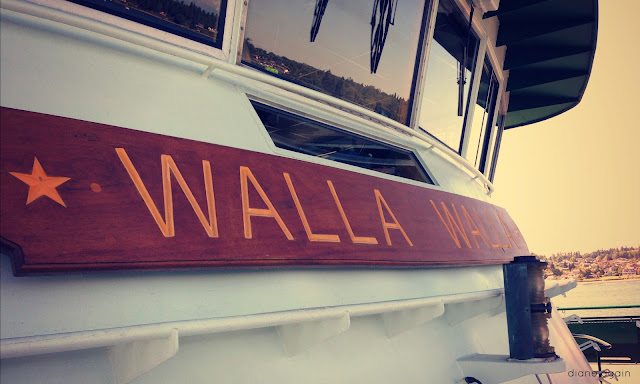 Then we drove over hill and dale for another hour or so, till we reached the Dungeness National Wildlife Refuge. See, birds and marine mammals love the spit as much as people do, so the government bought this land and does whatever it must to protect the furry and feathered residents of the spit.

I'm all for that.

So after gladly paying the $3 entrance fee, we trotted off through the woods for a half mile stroll down to the beach. 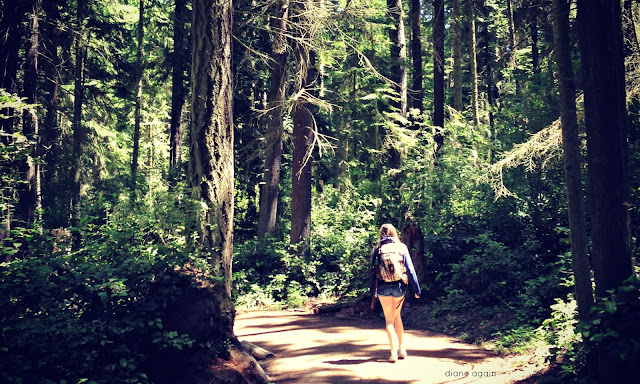 Our first glimpse of Dungeness Spit.. Yep. It's long and skinny and sandy, just as promised. 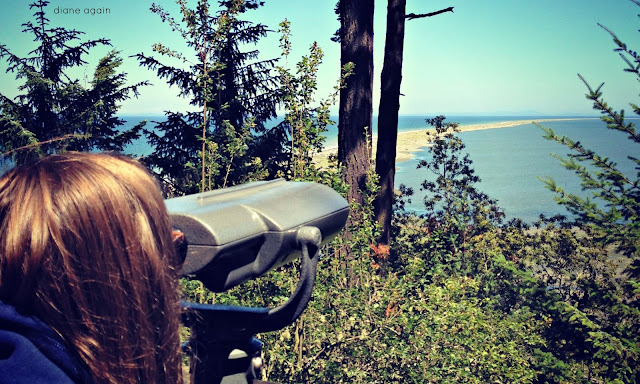 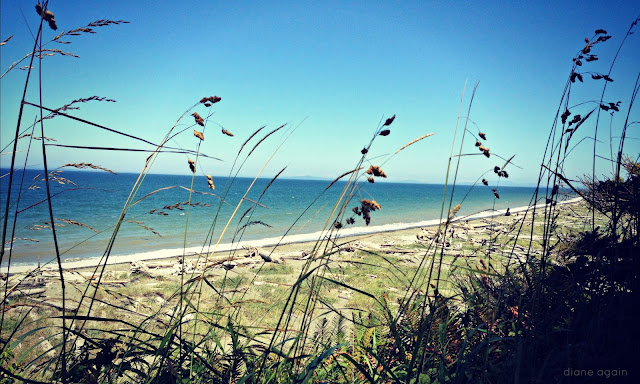 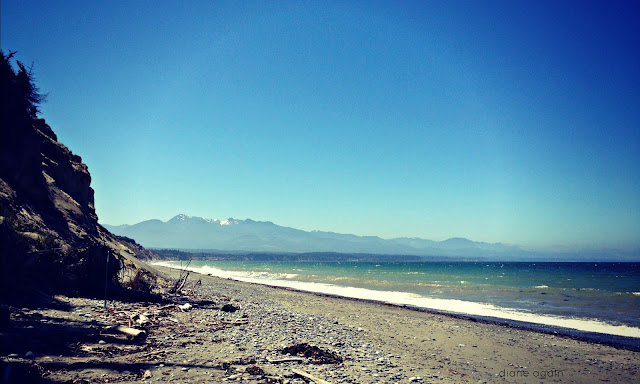 Once we got all the way down to the beach, this is what we saw ahead of us: narrow strip of sand, with lots of rocks and beach logs. We had strict instructions to stay to the left side of the strip. That's the open water side of the spit, and much more stable. The lee side is off limits. You don't have to tell me twice. 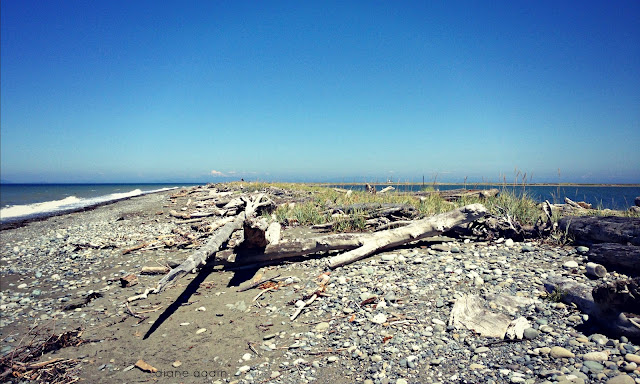 We saw the rotting corpse of a harbor seal.

And we saw a bald eagle, proudly perched on a beach log. 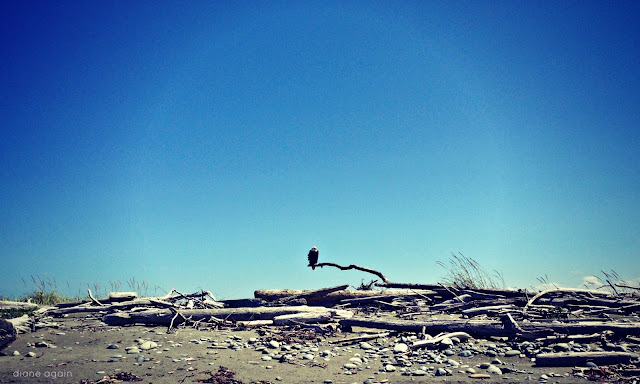 We stared at him in awed disbelief.

He kept an eye on us too, and let us get within about ten meters of his majestic, iconic American self.

That was a once-in-a-lifetime moment and I won't be forgetting it soon. 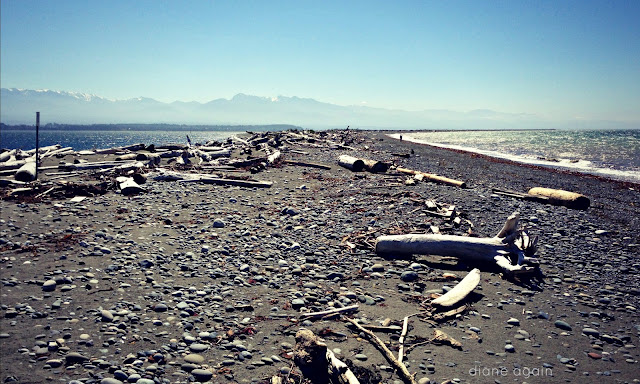 Eventually, we stopped to eat our lunch, and then we walked some more.

Almost two hours into our trip, we spied our destination: the Dungeness Lighthouse. Yay! 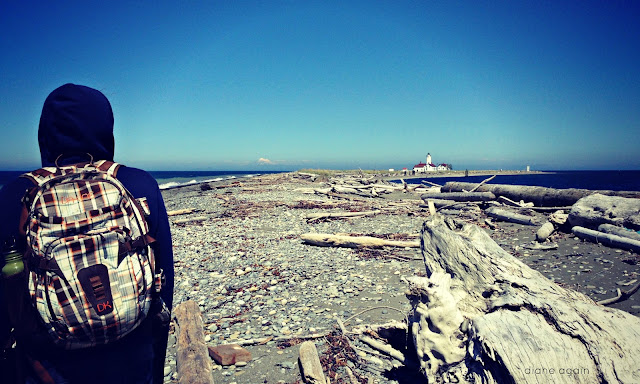 Already feeling like we had been wandering in the wilderness for ages, we embraced this little outpost of civilization, explored the grounds, found lots of precious treasures, and tromped up many tiny stairs to look out of the tower windows. 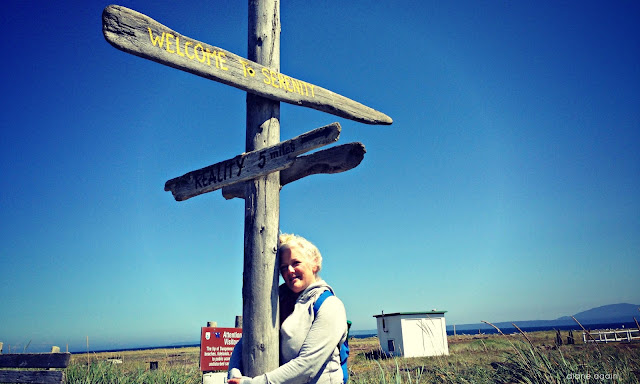 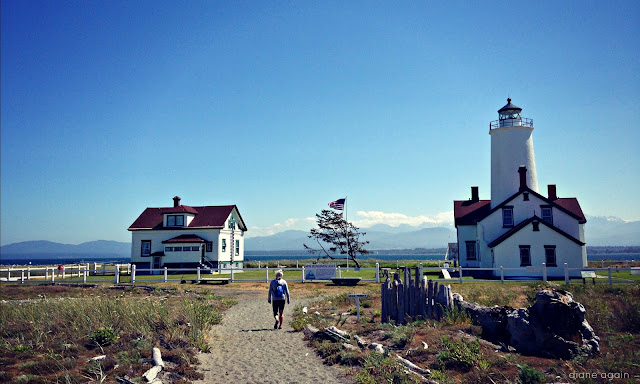 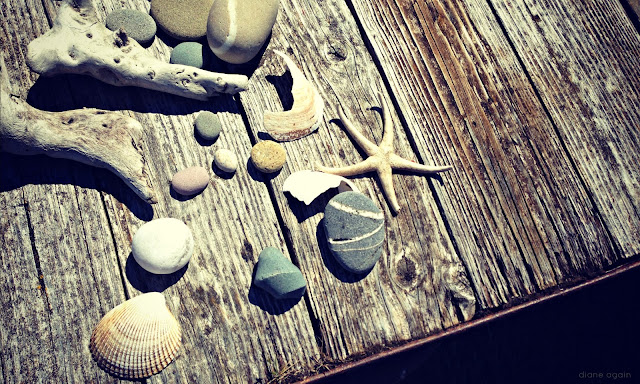 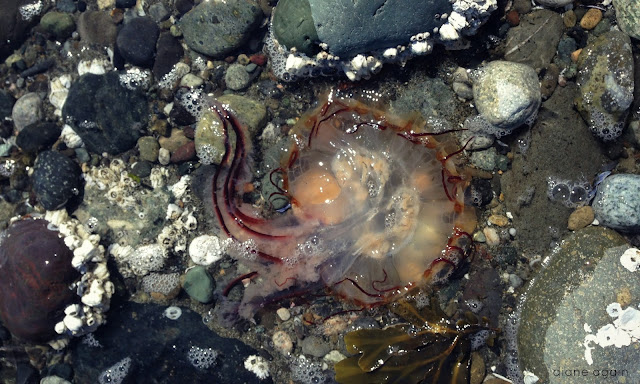 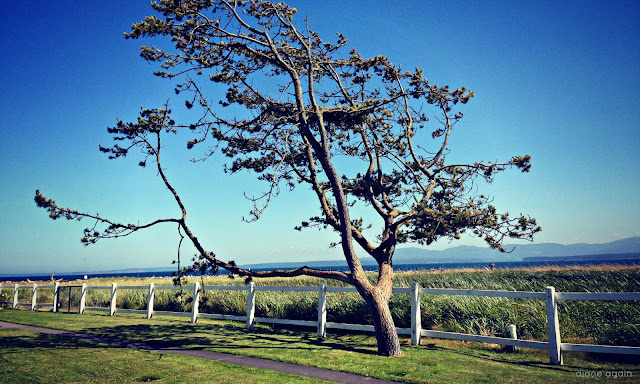 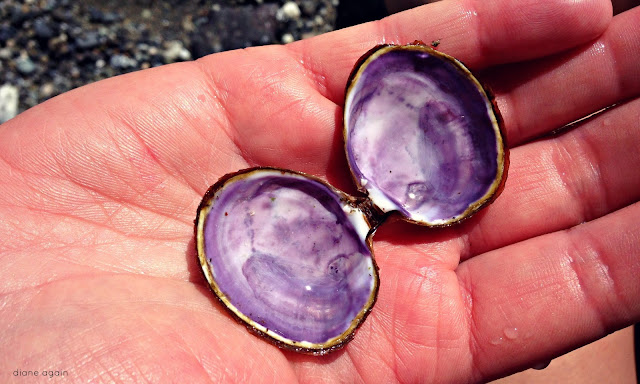 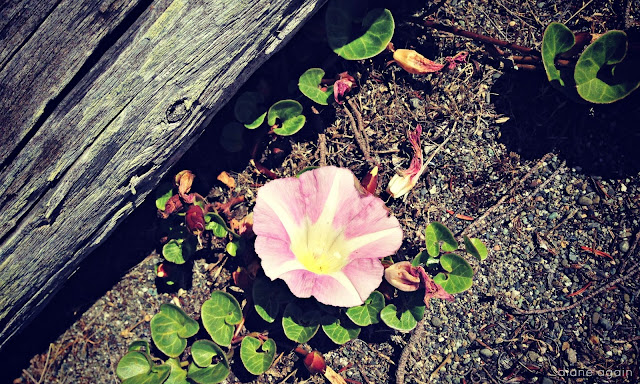 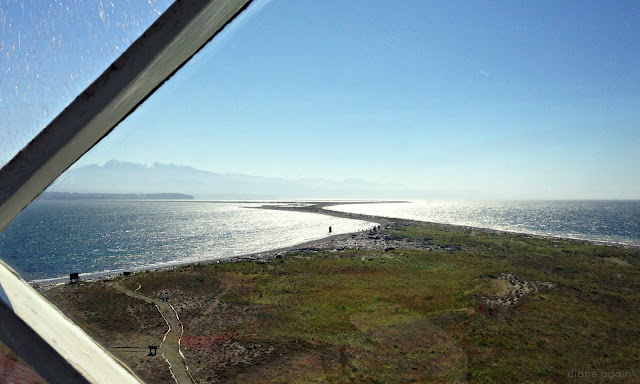 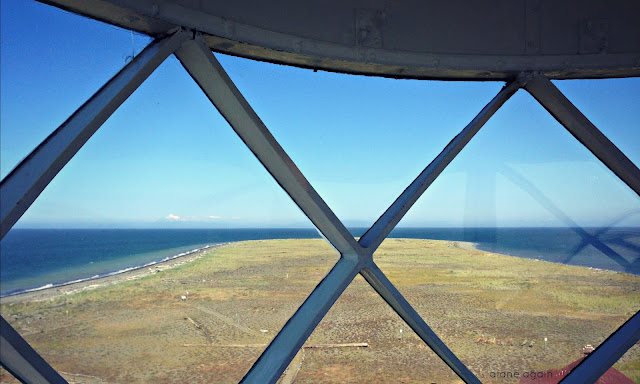 And then it was time to turn back. Ready to do it all again? 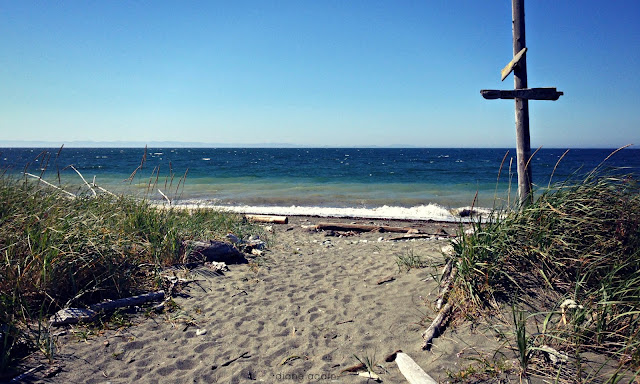 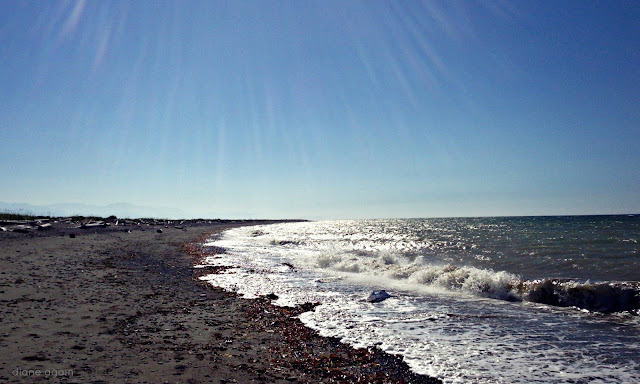 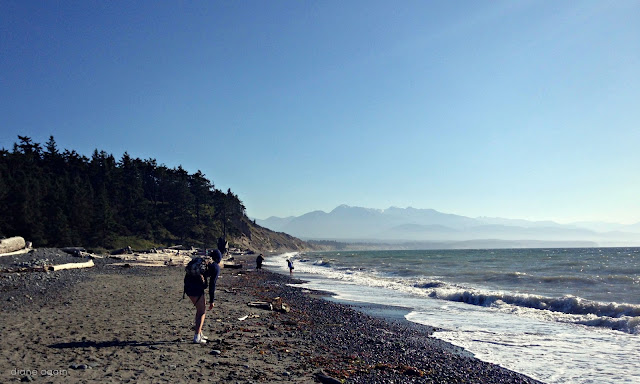 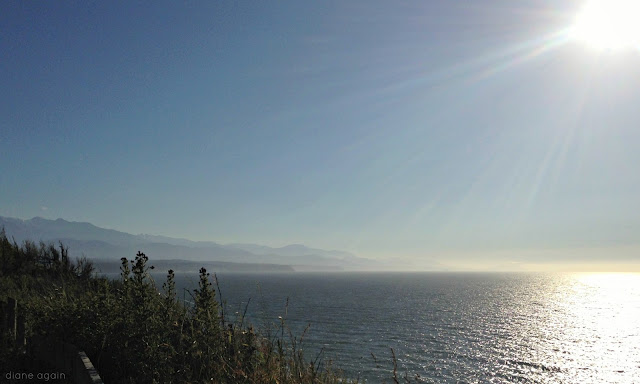 The round trip was exactly 11 miles long. I underestimated the effect of walking on a rocky beach for all those miles; our feet were a bit worn out from the bumpy, uneven terrain. But the spit was a big hit, and both of us agreed that we would definitely hike it again.

In other words, we love to spit. 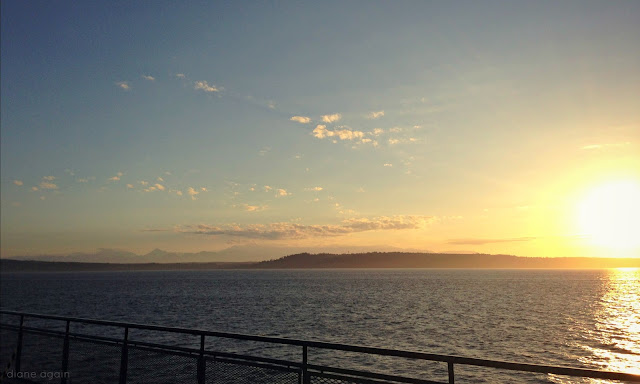 So that's my first story about spit.

My second one has no photographs, so you'll have to use your imagination.

On our morning ferry ride, I was standing at the railing of the upper level of the passenger deck. One story below me, on the lower level, was a family of busy children. There were two parents, a little girl maybe seven years old, and five young boys.

The oldest of the boys looked to be about 12, and I watched him lean over the railings, staring down at the water rushing far below. And I watched him do what comes naturally.

Oh, he was polite about it. Very discreet. And neat. But make no mistake, he definitely spit.

His mother noticed too. She was not impressed. Immediately loosening her tongue, she gave him a first-class scolding, using expressions like, "That's not happening again," and "What are you thinking?" and "If I ever see you try that again, you'll be sorry." She was quite thorough.

Not satisfied with her own dressing-down, Mom then signaled for the dad to come over, and she briefed him on the situation. He pounced on the boy, firm hand clasping the back of the hellion's neck, and marched him away from the rest of the family. In a shadowy corner of the deck, Dad delivered a quick, manly version of the same conversation, which included one major scowl, two short sentences in a growling tone, and a bit of finger shaking. Then he released the troublemaker, who hung his head and shuffled off inside, to bear his shame alone.

Now, I enjoyed this little tableau for several reasons.

I love to see real families interact like this in public. Kids act up, parents go nutty, it's all perfectly real and hilariously normal.

I'm especially amused by these moments of family drama now that my kids are a bit older, and I feel like my days as Crazy Mama in Public may be over. Knock on wood.

But my favorite aspect of this situation was the nature of the crime: spitting over the side of the ferry. Because if the absolute truth must be told, I have spit over the side of a ferry many a time.

Oops. Sorry. I was socialized by my brothers to spit from high places into moving waters, and it's instinctive to me now. Plus, I just think it's fun.

I only hope those parents never catch me in the act.
Posted by Diane Streicher @ Diane Again at 2:22 AM

Email ThisBlogThis!Share to TwitterShare to FacebookShare to Pinterest
Labels: Interesting People, Travels Near and Far