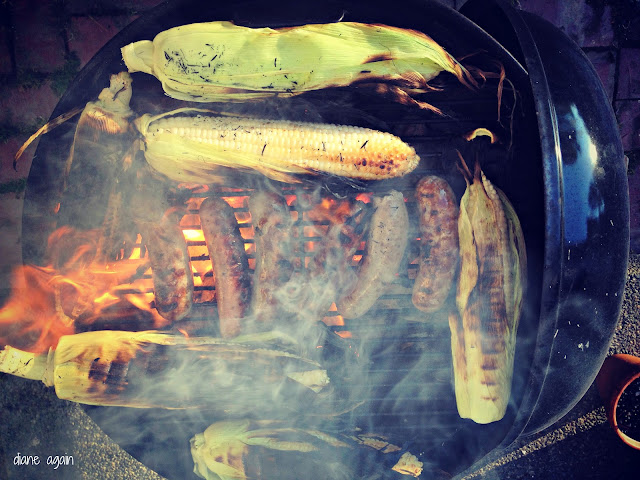 Dinner was an exciting event tonight.

Things got a little out of hand while I was barbecuing, but let me start the story by assuring you that everything turned out fine in the end.

Let's rewind to the planning phase of the meal. I'd already decided on bratwurst and corn on the cob, and I was deliberating about whether it was worth the hassle of starting a charcoal fire just to crisp up the pre-cooked bratwurst, which I could easily do in my regular oven. I'm all about that authentic charcoal-grilled taste, which is why I refuse to convert to a gas grill, but an hour's worth of warm-up for five minutes of cooking time does not necessarily seem like a good plan.

Flash of dazzling brilliance! I've always wanted to try grilling corn on the cob, rather than the old-school method of just steaming it in boiling water. This seemed the perfect opportunity to try something new and justify the charcoal fire at the same time. All systems go!

So I peeled off a few outer layer of the corn husks, soaked them in water, unwrapped them to butter and season the ears, and then wrapped them back up again in their remaining husks. (See the full recipe at the end of this post.) But once I plopped the ears over the fire, they cooked with alarming speed. Despite the pre-soaking, the husks caught fire over and over again. After a few minutes of frantic troubleshooting, I calmed things down by moving the corn to the perimeter of the cooking surface and positioned the sausages in the middle. Now the fat dripping from the meat caused the fire to flare up, which triggered another round of flash fires breaking out among the corn husks.

At that point, I was more fascinated than fearful, so I decided to chase down my phone and take a few photos of my towering inferno. My family thought I had lost my mind.

Once I snapped the pics, I changed gears. Moving with the swift, focused energy of an Avenger, I armed myself with a metal baking pan and a pair of tongs, and pulled the smoking ears of corn off the fire altogether. I yanked back the still smoldering husks with my bare hands, wrapped each ear in a piece of aluminum foil, and quickly put them back on the fire where they could now cook without bursting into flame every 12 seconds.

The strategy paid off. Within ten minutes, we were enjoying our grilled corn on the cob, which was actually amazingly well cooked. It was only lightly sprinkled with husk ash, and tasted surprisingly like fresh sweet corn, rather than scorched cinders of wood, as you might have guessed.

After the meal, I asked my diners to compare the taste of the grilled corn to our usual steamed version. They all agreed that the taste was surprisingly similar, and that the grilling technique was probably not worth the extra effort.

Hmm. I would have to agree about the taste. But if you want to light your night on fire, grilled corn on the cob is definitely the way to go.

Corn Grilled in the Husk

Start a fire in the barbecue grill. Peel off several layers of thick outer husks, and soak the ears of corn in cold water for 15 minutes. Invert the ears to drain water trapped in the husks. Gently peel back the remaining husks; remove the silk tassels, butter and season the corn. Carefully replace the peels over the kernels of corn.

When the fire is at a medium heat, place the ears in the center of the grill, turning them often to prevent charring. After several turns, move the ears to the edge of the grill, where they will receive indirect heat. Continue cooking for a total of 15 minutes. or until dark outlines of the kernels appear on the outer husks. Cool, peel, and enjoy.