The Bridges Of Madison County

During our summer road trip, we saw more interesting sights that I could squeeze into my real-time posts. Now that I'm back home and have fished all 548 photos off my devices, I have a few more road trip stories to share.

To catch up on the rest of the trip, start here.

It wasn't the first time I woke up from my car nap that I realized something was amiss. Sure, I sensed that we had veered off our proper route on the interstate and were now prowling the back roads of Iowa. But I just assumed my husband was performing his usual mid-morning Starbucks hunt and fell right back to sleep.

But it was ten minutes later, when my body woke me up a second time, that I realized this unexpected detour was more than just a coffee break. Rubbing my eyes and tilting my seat back to its upright position, I took in the winding hills of the two-lane highway, lined with well-kept homesteads and lush cornfields as far as the eye could see. Before I could gather my thoughts to pose a reasonable question, my typically predictable and totally by-the-book husband could contain himself no further.

"We're going on a side trip!" he exalted, giddy with his own cleverness and derring do.

Turns out that when the sign announcing our entry into Madison Country, Iowa, popped up along our route, he decided that a tour of the local covered bridges was in order.

Thus began an interesting morning adventure around this famous patch of green, and a series of new discoveries for me. 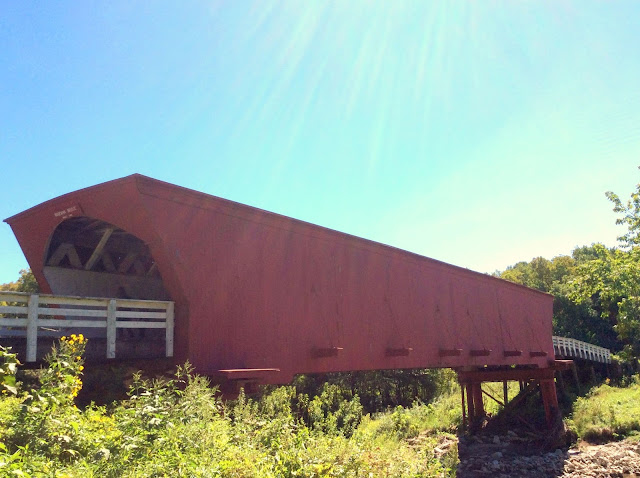 ^ The bridges of Madison County, popularized in story and a 1995 film starring Clint Eastwood and Meryl Streep, really do exist. What's more, they are big, barny, brawny affairs, much larger and sturdier than their New England compatriots (or at least they seemed that way to me) and totally in keeping with their midwestern surroundings. 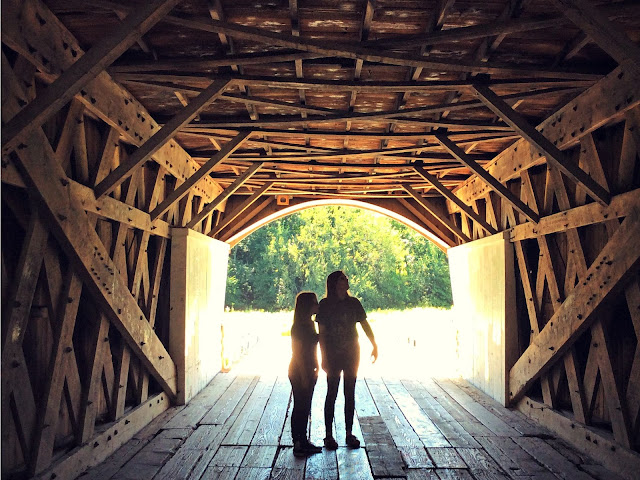 ^ My two younger daughters were entirely smitten with not so much the bridges themselves, but the countless and infinitely varying messages penned on the interior walls. Notes, love letters, and autographs from local old-timers, love-struck teens, and a surprising range of international visitors offered my girls entertainment aplenty and I swear they read every one. 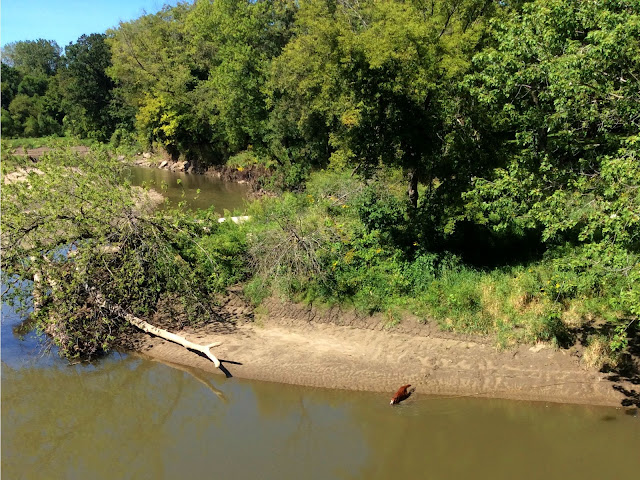 ^ For his part, Ranger would have NOTHING to do with the bridges. Time and time again, I tried to casually lead him into the big red mouth but as soon as my boy approached the shadow of the structure, he hit the brakes, dug all four feet into the wooden planks, and resisted further forward movement with every ounce of his being.

So he went swimming instead. 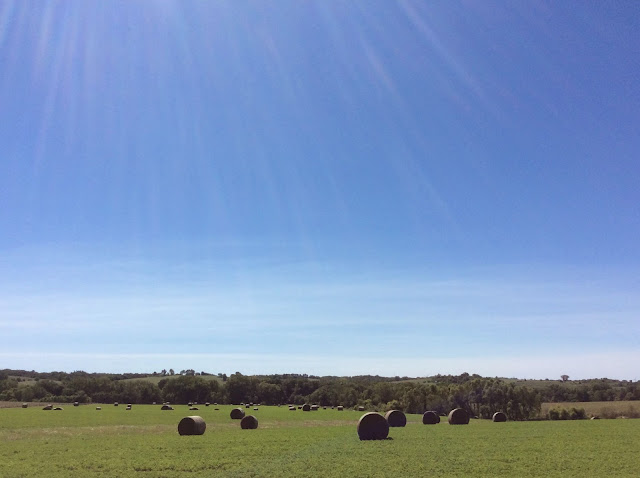 ^ As we wandered from one bridge to the next - there are six still standing and we visited four - our senses were dazzled by the Iowan countryside and small town scenery. I for one could not get enough of the hay rolls dotting the landscape, and was perfectly willing to wade through foot-high grasses lousy with grasshoppers to get a good shot. 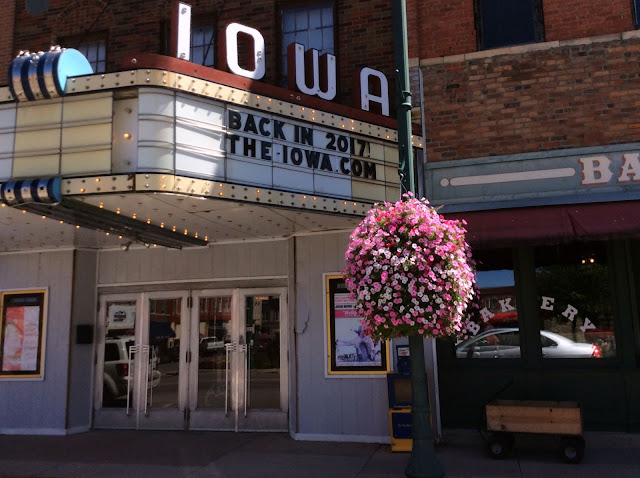 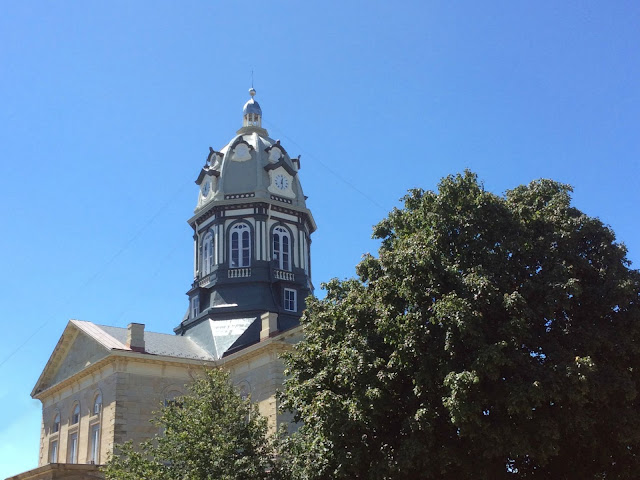 ^ Winterset, Iowa, is the county seat and gem in the crown of Madison County and also the birthplace of famed cowboy actor, John Wayne. A surprisingly affluent and hipster-licious city, I hung out the car window snapping shots as we rolled through town. 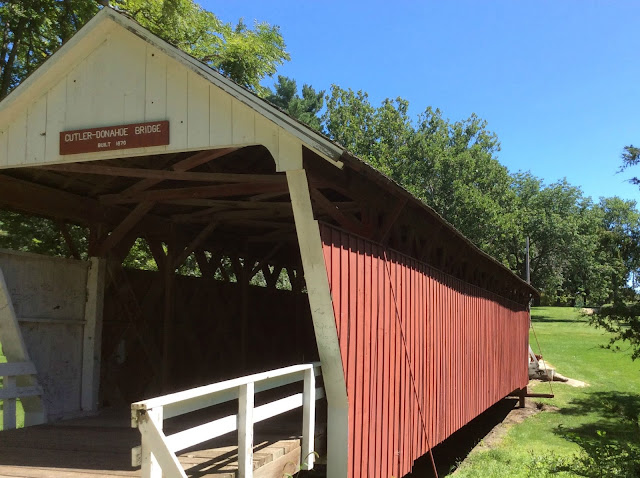 ^ At our second bridge, Ranger displayed a further development in his frantic covered-bridge phobia. Not only did he refuse to set paw anywhere near the big red beast, but he cautioned me - with the full range of his vocal chords - to stay away too. I brashly ignored his yelping and walked through this one, but when I came out the other side and looked back at my noisy dog, I saw that he had stepped around the bulwark to keep an eye on me.

Look carefully at this photo and you will see his red head at the opposite end of the bridge. Squint your eyes and you may be able to make out his offended facial expression and open mouth. Yes. He was barking at full volume. 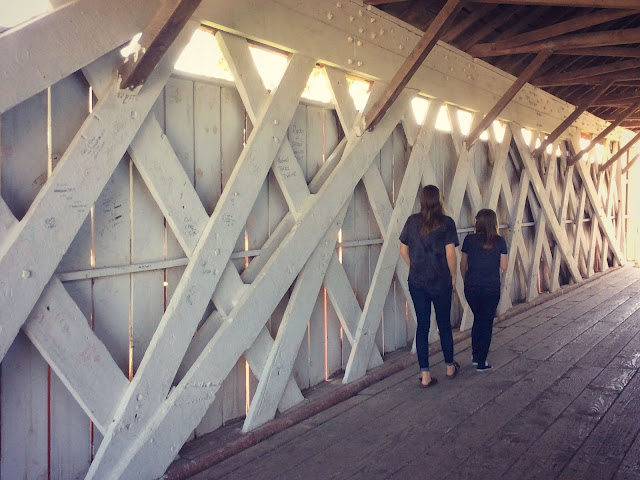 ^ More bridges, more bridge graffiti. The interior of this bridge was filled with light from the cut-out windows which, despite the monstrous oaken timbers, created an atmosphere that felt strangely light and ethereal. 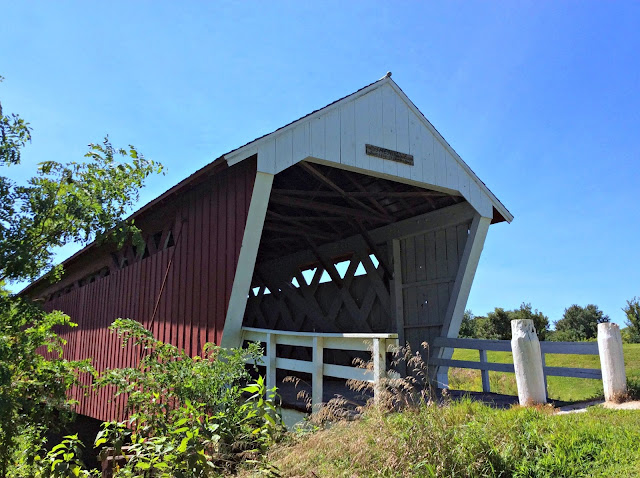 ^ Two other unexpected discoveries from my day in Madison County:

First, there were a surprising number of other sightseers visiting the bridges on this ordinary August day, including apparently international tourists. The foreign tongues and European soccer jerseys pretty much gave them away.

And despite the many jokes and references made among us visitors, at least on this day spent among the bridges of Madison Country, Clint Eastwood was nowhere to be found.
Posted by Diane Streicher @ Diane Again at 11:56 PM

Email ThisBlogThis!Share to TwitterShare to FacebookShare to Pinterest
Labels: Art and Architecture, Pet Love, Travels Near and Far