On a sunny Sunday morning in Ohio, ninety years ago almost to this very day, a group of eager young students graduated from college. Among the freshly minted ministers at Cincinnati Bible College were Carl, a red-headed pastor of word and sacrament, and Clara, a former farmer's daughter whose expertise lay in Christian education, the highest-ranking field for women in the church of that day.

Commencement exercises were completed by noon, but the excitement was far from over for Carl and Clara. In a ceremony held on the leafy green campus lawn, they were married that afternoon, and the next day, boarded a steam ship bound for Africa..

This trip was no exotic honeymoon. The couple shared a dream of doing mission work in Africa. Their plan was to live among the native people of Southern Rhodesia, preaching and teaching and setting an example of Christian brotherhood, for the rest of their lives.

Yep. Forever. Carl and Clara went all in. When they sailed away from New York Harbor, they had no intentions of ever coming back to America.

Several years passed. The couple agreeably adjusted to the tribal culture, the slowly-progressing work, the unremitting heat. As their efforts in the mission field began to bear fruit, so did their family grow. A baby girl was born to them, and Carl and Clara both relaxed into their new life, calmly confident that their dream was firmly on track.

Then the letters began.

Carl's mother wrote often and shared news of the family business. Carl's father and younger brothers were well drillers, and with economic havoc of the Great Depression beginning to unfold, their livelihood was threatened.

Please come home and save the business.
You're the only one who can help us.
Without you, we will all be financially ruined.
Staying in Africa is selfish.
You owe this to your family.

What a dilemma. Carl and Clara's happiness was shattered. After much somber searching of their souls, they decided that they had no choice but to return to the states and help the family out of this jam. Maybe this would be a short term detour to their dream of missionary life; maybe they could return to Africa and pick back up where they were about to leave off.

But that never happened.

Sixty years later, with not one but two daughters successfully raised to adulthood and Carl gone to his heavenly reward after a long and satisfying career as a top-notch well man, Clara still wrestled with anger and bitterness over how their missionary dream was snatched away from them. Despite her generous Christian heart, Clara could not forgive and forget what had happened.

How do I know these things?

Because Carl and Clara are my grandparents; my mother is their second-born daughter. 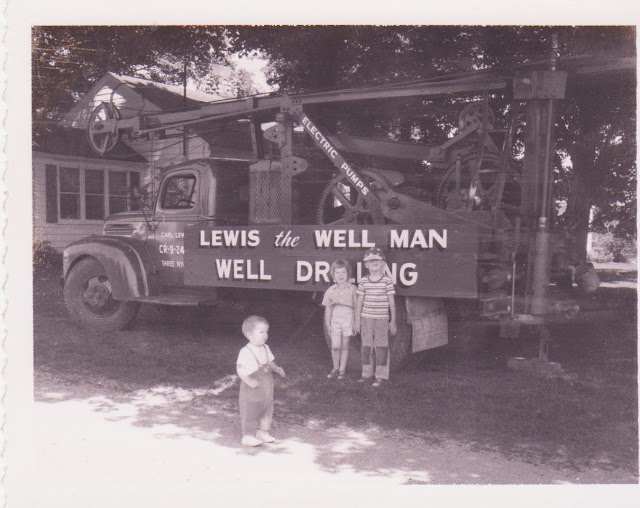 Me and my brothers, admiring Grandpa's drilling rig and hoping for
one of his rare offers to take us for a ride.


Back when I lived in the Midwest, my grandma and I would often make long road trips together, and she would spin out for me this story of her life as an African missionary..She loved to go through the details, over and over. And to be honest, there are some rather unsavory bits to the story, like the part where my grandpa's parents ditched him with a heap of outstanding debt and then abandoned the business to him altogether. She told every part of the story with a full measure of emotion, good and bad.

But once I said to her, Grandma, you have lived such a wonderful life. All the people who hurt you are dead and gone. For your own sake, can you finally forgive them?

And as we rolled through the evening darkness of Interstate 94, somewhere around Jackson, Michigan, my sweet grandmother clenched her teeth and bitterly vowed that she would never, ever forgive her in-laws for ruining her beautiful African life. 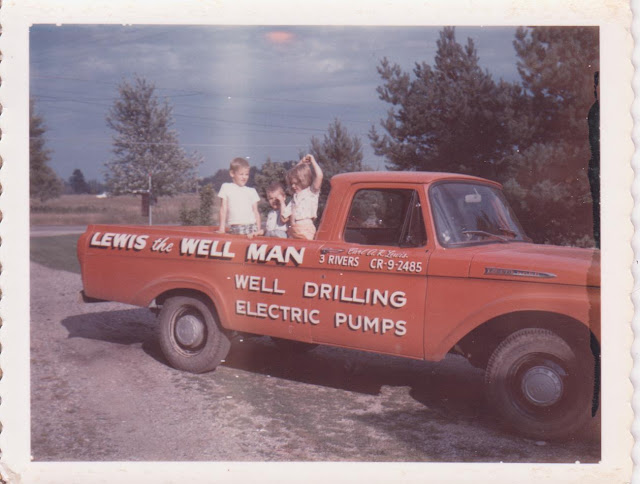 My grandpa's business was a one-man operation, but he had an impressive fleet of four vehicles to run his business. Every one of them was painted bright red - his favorite color.


I don't really understand why this story has such an impact on me. but it does. Whenever I'm wrestling with decisions in my life, I take this little gem out of my memory and turn it this way and that, trying to see if there is wisdom, guidance to be gleaned from the savannas of southern Africa, almost a full century ago.

And while I see gleams of ideas about loyalty and teamwork and family commitment - not to mention the essential need for forgiveness - the strongest message that comes to me is always this.

Follow your dreams.
Posted by Diane Streicher @ Diane Again at 2:07 AM