By lucky chance, my trip to Malaysia last spring coincided with the country's rare election season. In that southeast Asian land of sideways democracy, the political landscape and vote-casting process was surprisingly different from what happens in the USA. I was fascinated to observe it all first-hand, and I spent a lot of time trying to explain to my Malaysian friends how we Americans vote.

So in honor of today's general election, I want to share the story of how democracy happens in my homeland. 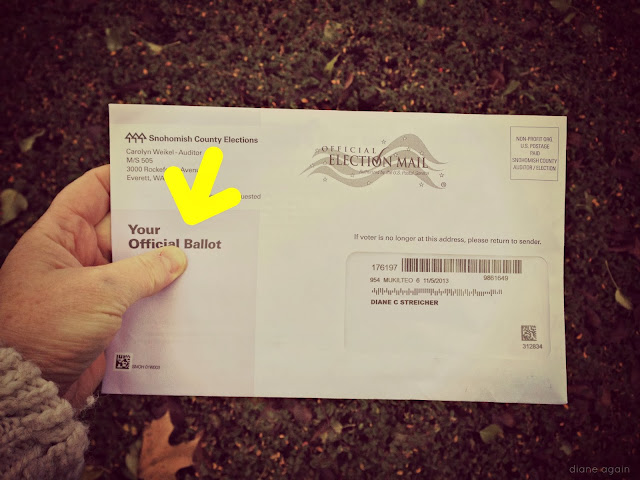 ^ First of all, Americans hold a general election every single year, always on the first Tuesday in November. Unlike Malaysian elections, which are declared by the presiding prime minister, our Constitution sets forth this time table and ain't nothing nobody can do to change it.

So, every year in late October, an envelope like this one shows up in the mailboxes of all Washington registered voters. Yippee, it's my official ballot!

I should point out that election practices vary just a tad from state to state; my home state happens to be a little unusual in that we all vote at home, rather than in a polling place. Most states still hold on to the polling place tradition, but here in the Upper Left USA, we've evolved. 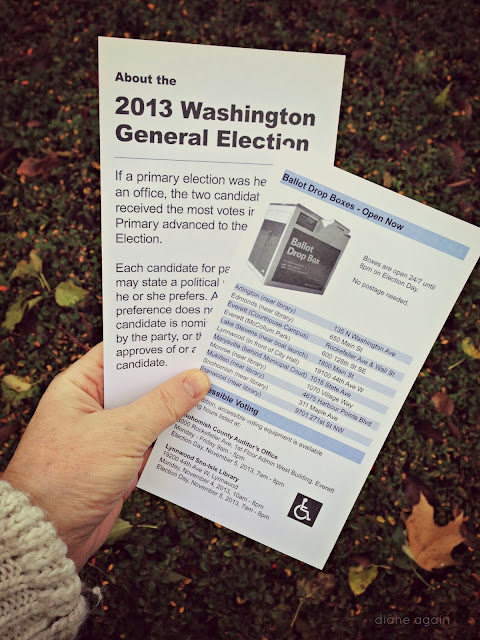 ^ Inside the official ballot envelope, I receive several pages of instructions, 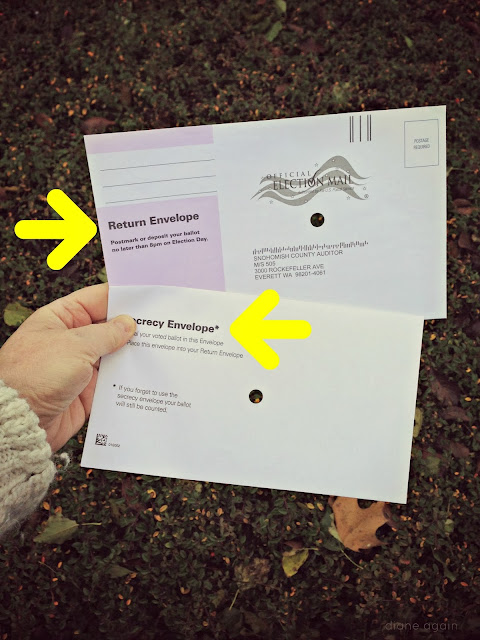 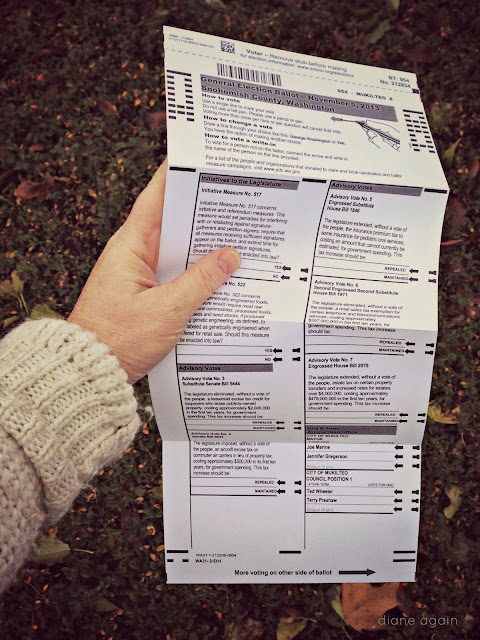 ^ and my rootin' tootin' Official Ballot. Now, we have elections every single year, but the specific offices for which we are voting vary widely from one election to the next. This year was a bit low key; with no big national or state decisions to make, my most exciting task was to choose a new mayor for Mukilteo. 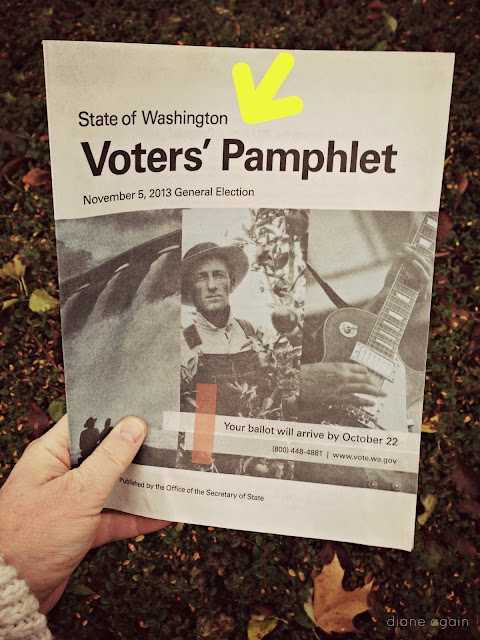 ^ Along with my Official Ballot, I also expect to find in my mailbox a State of Washington Voter's Pamphlet. This handy little publication explains all the particulars on each and every national or state-wide race that I will be voting upon. 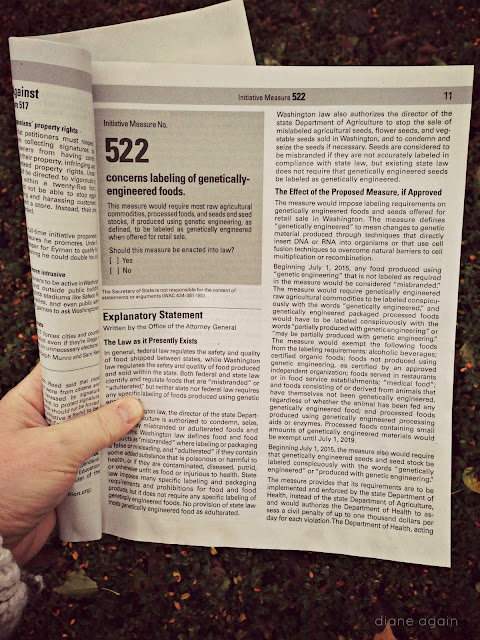 ^ Here's how it looks inside: lots of dense text and technical explanations of each candidate and issue on my ballot. Written by independent folks who have expertise on each subject, the Pamplhet presents multiple points of view, and clearly states who wrote what. As a voter, I trust this publication to give me fair information, and I read it thoroughly before I vote. 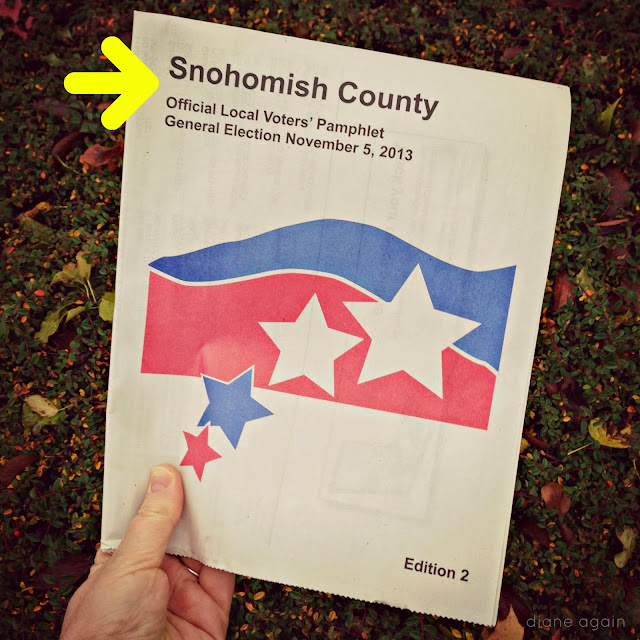 ^ To be precise, I actually receive two Voter's Pamphlets - note that this one covers local races in my county and town. 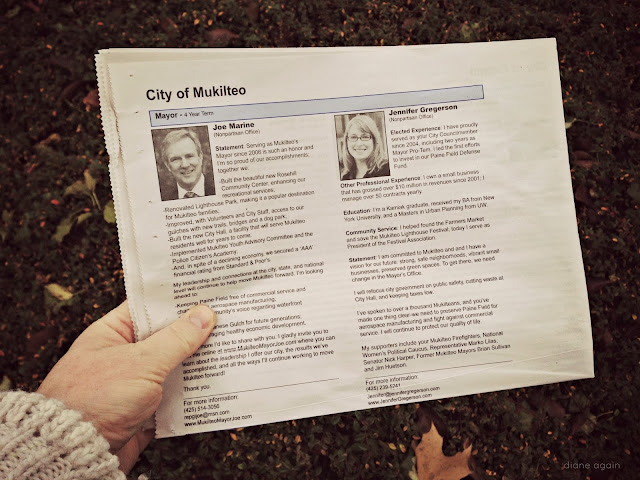 ^ And here is the inside of my Snohomish County Voter's Pamphlet, helpfully folded open by my husband to the page that shows the photographs and provides the statements made by the two candidates running for the mayor of Muktown.  See? Joe Marine and Jennifer Gregerson. 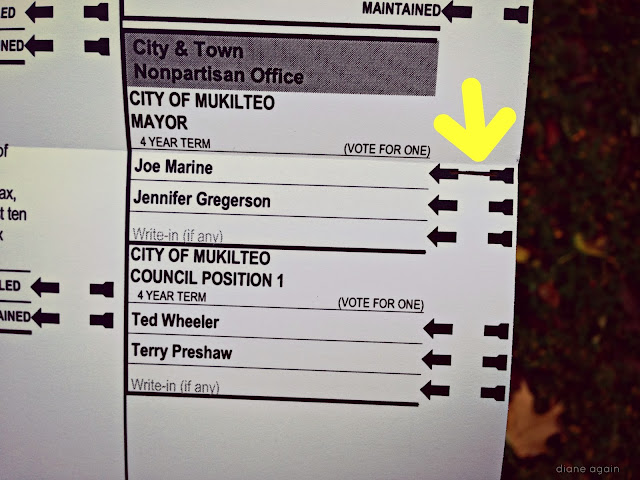 ^ No offense, Jennifer, but I decided to vote for Joe. So I grabbed my ballot and a plain ol' pen, and drew a single line to connect the arrow by Joe's name.

It's that simple. Then I voted a few other races - I cast a vote only when I feel reasonably well-informed on the candidates, and given that this ballot had over twenty local contests, I just can't keep up with them all.

It's also worth noting that at the local level, most politicians are considered 'nonpartisan' rather than Democrat or Republican. I believe that this system is quite different than Malaysian ballots, where one votes for a particular party, and thereby approves that party's candidates in all the applicable races. Here in the US, we are allowed to pick and choose. 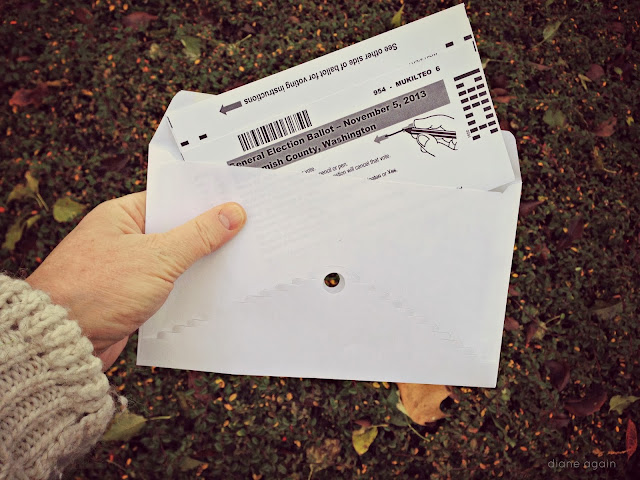 ^ Now comes one of my favorite parts: I stash my completed ballot into the Secrecy Envelope, and lick it shut. 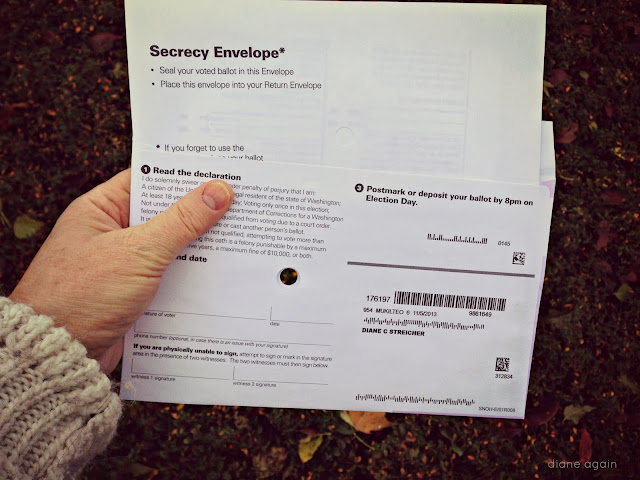 ^ Then the Secrecy Envelope slips inside the Return Envelope, which in turn is licked and sealed. Oh, such privacy and security surrounding my humble vote. I feel so proud to be a part of democracy. 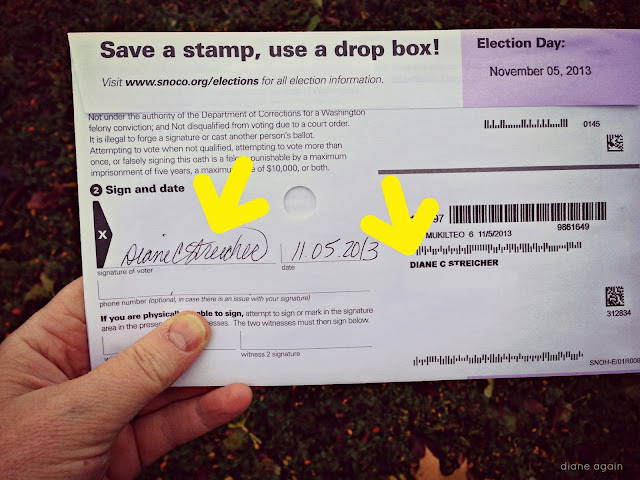 ^ Finally, I sign and date the back of the Return Envelope, to verify that I am indeed the registered voter for whom this ballot was prepared.

That is America's fool proof method for ensuring that each registered voter casts one and only one vote. We don't use sign-in logs, or the purple finger ink that is the source of such controversy in Malaysia. And while our system is not perfect, we don't have any problems with voter fraud. 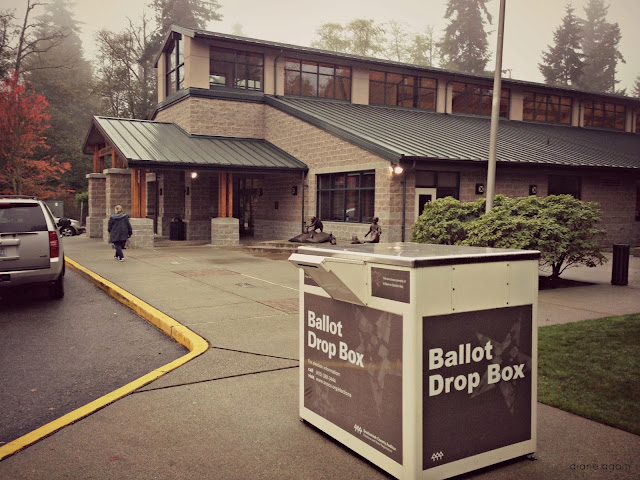 ^ Now to deliver my ballot for counting. One option is drop the envelope in the regular post, but far more convenient is to take advantage of the Ballot Drop Box. For a week or so preceding Election Day, these big metal boxes appear in prime community locations - this one is at the Mukilteo Library. Voters can drop off their completed ballots at any time of day or night, up till 8 pm on Election Day 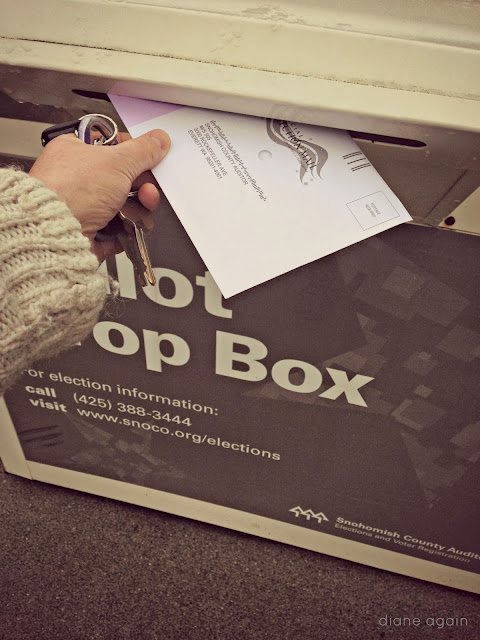 ^ As you can see, the boxes are quite secure and tamper-proof. On Election Evening, the whole shebang will be picked up and carted off to be counted, where there are countless protocols and controls to ensure that ballots are not miscounted. 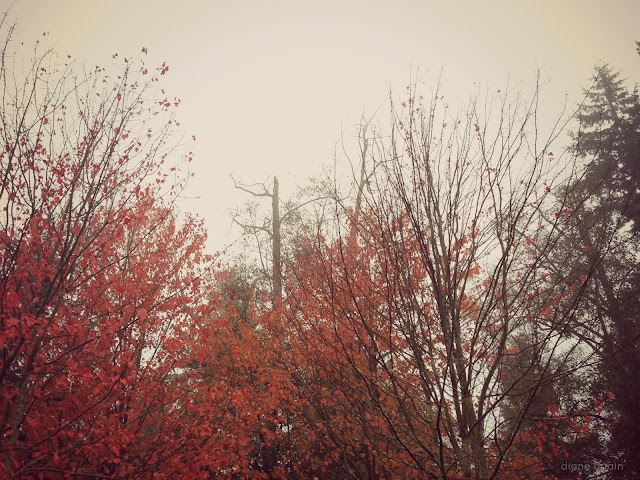 ^ I topped off my civic duty with a quick stroll around the library grounds to snap a few pics of the glorious autumn fog that was just creeping back into the landscape. As I drank in this natural beauty, my heart swelled with patriotic pride, and I counted once again the many blessings of being an American.

Never fear, little Malaysia. you are my home away from home and I love you too. I just wish your government would run a clean election for a change. 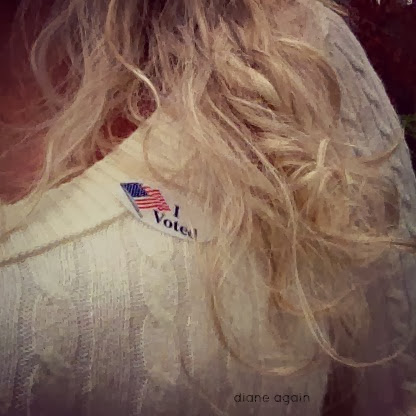 ^ P.S. There was one slight hitch in my Election Day experience. The polling workers had run out of their usual awesome "I Voted" stickers. So. No sticker for me this year. Sigh.  I had to content myself with digging this picture of last year's sticker out of my files. Next year, I will ask for two. 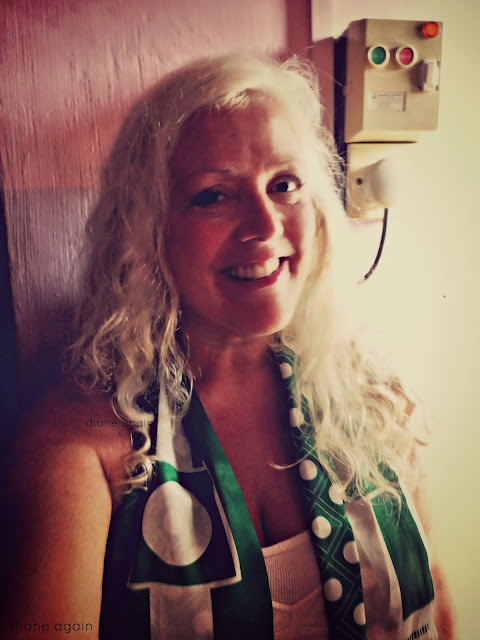 For more stories about my adventures in Malaysian politics, check out:

Email ThisBlogThis!Share to TwitterShare to FacebookShare to Pinterest
Labels: Inspired Learning, Seasons and Celebrations, Travels Near and Far