Last time, I promised to tell a story involving me, spray paint, a graffiti wall in the heart of Seattle, and a chance encounter with a straight-up thug. And here I am, ready to deliver. 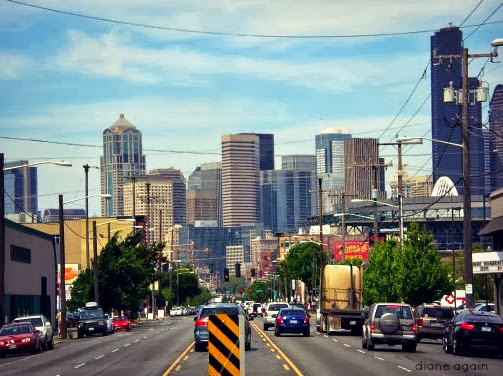 ^ This adventure begins in an area south of Seattle known as SoDo. Back in the day, there used to be a huge, 70s-style, concrete-domed stadium called the Kingdome at the northern end of this neighborhood; thus this industrial region, described as "South of the Dome," sports the nickname of SoDo. Clever.


But on this lovely summer day in 2009, I was on a mission. I'd heard, through some sort of artist grapevine, that there was an amazing graffiti wall along these back streets. Since the city of Seattle, in all its infinite wisdom, had recently decided to outlaw free-form street art, the owner of a nearby warehouse had generously offered to open up the back of his facility to any spray-paint cowboys who cared to take a shot.

So, lacking any interested companions in this mission, I set out by myself to find this aerosolers' Mecca. 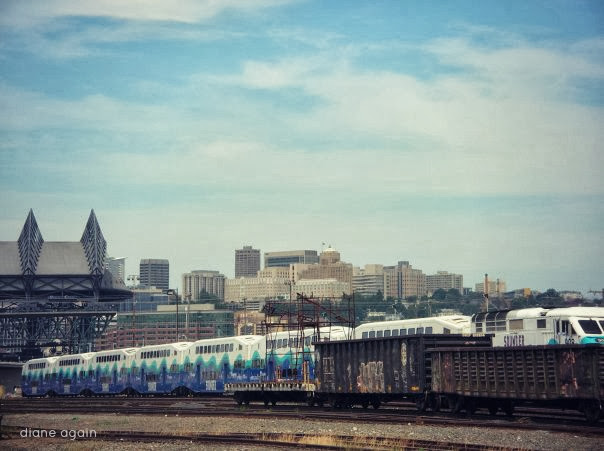 ^ Once I found the train tracks, I knew I was in the vicinity. And honestly, it wasn't too hard to know when I stumbled upon the right place. 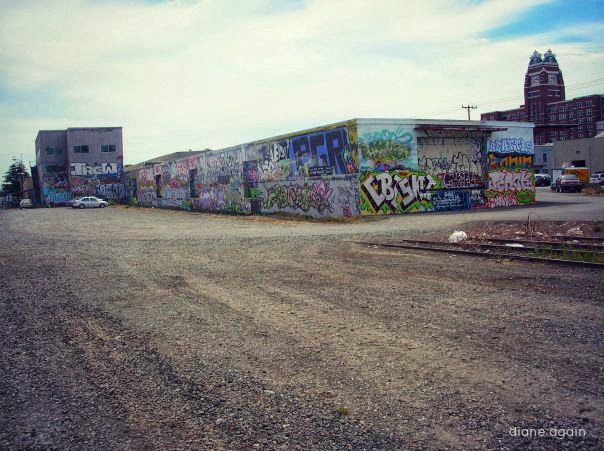 ^ Because among the grey, drab industrial architecture and endless asphalt and gravel lots, a burst of flamboyant color and pattern suddenly danced before my eyes. Glory be, it was truly a sight to behold. 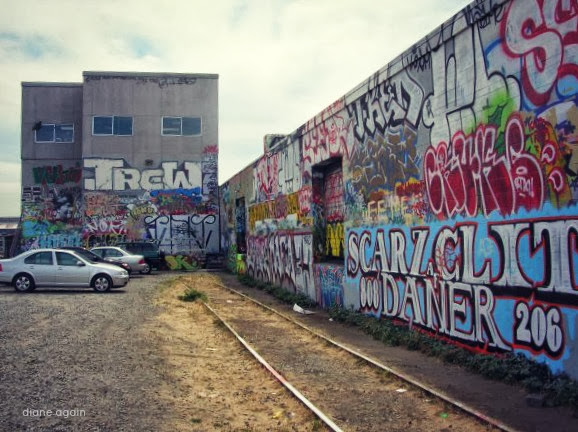 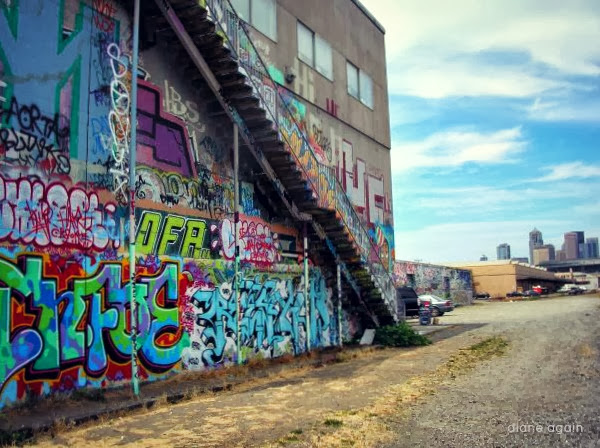 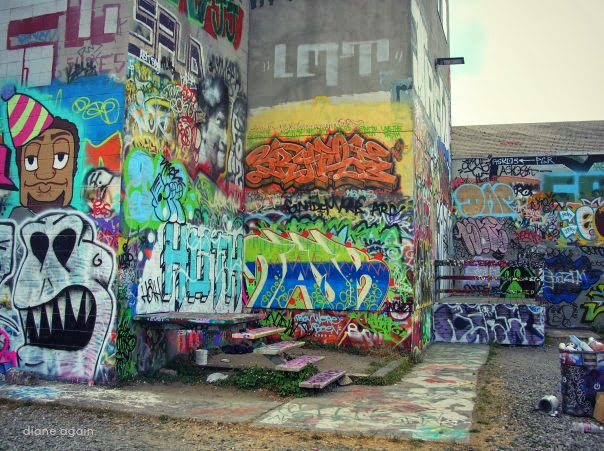 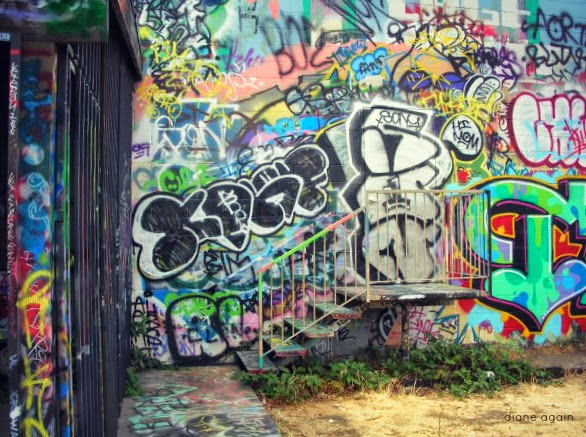 I took a billion pictures. Well. At least a hundred. With practice, my eyes were able to sort through the amazing blur of color and pattern and layers of images, in order to see the specific works of individual artists. I was fascinated by the range and depth of the various creations, and newly appreciative of the art behind the visual chaos. 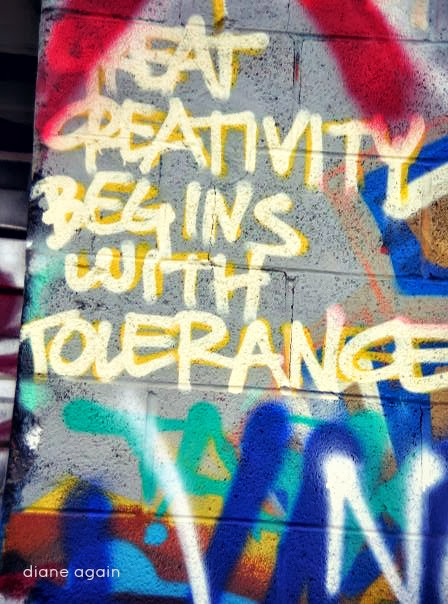 ^ I was surprised and intrigued to find inspirational messages among the bold graphics, and this one packed a particularly powerful political message. 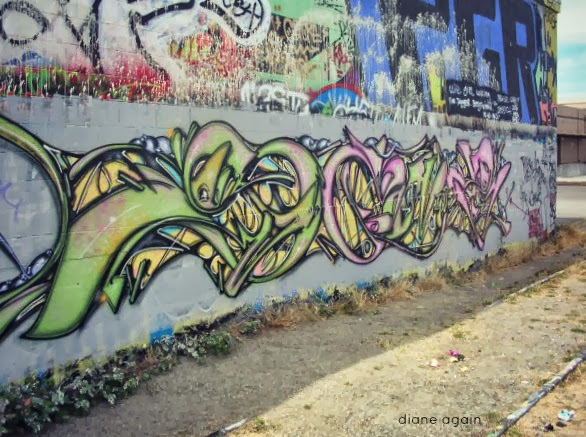 ^ This green, pink and yellow number was the most sophisticated and complex piece that I found. Notice how the artist began his work by establishing a long rectangle of grey for a background. While the overall image is almost too much for my eyes to take in, a series of zoomed-in detail shots make it much easier for me to appreciate the workmanship and beauty of this amazing creation. 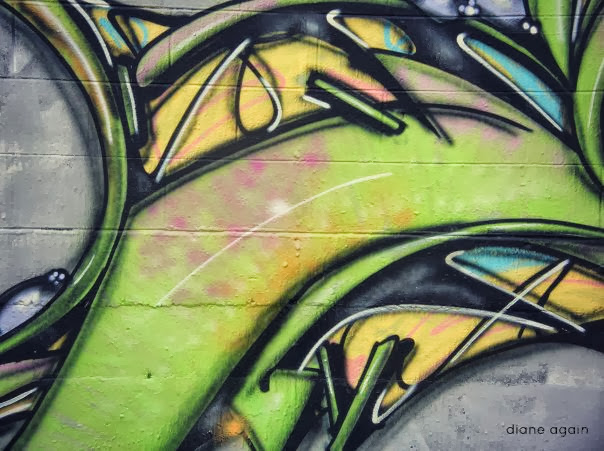 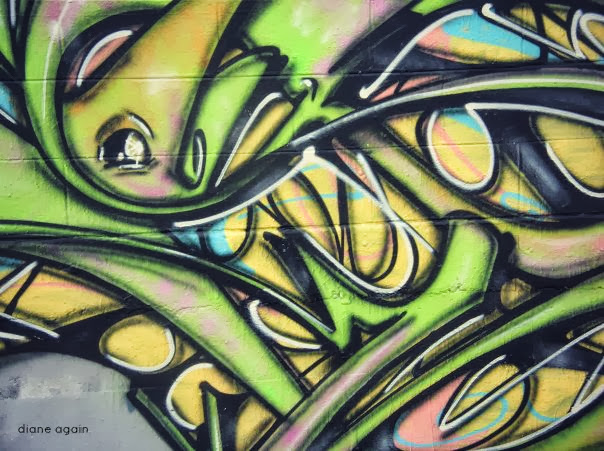 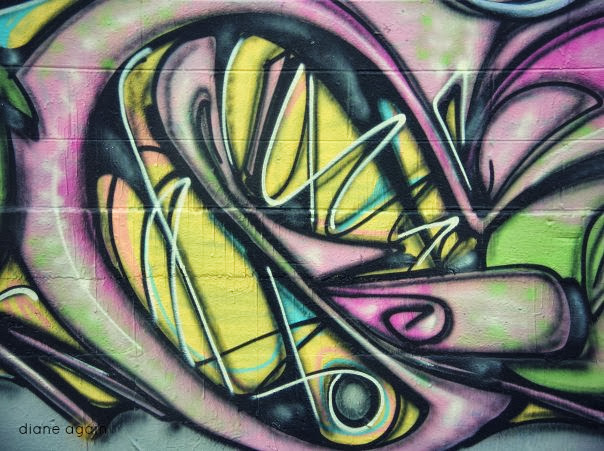 Fanciful and elaborate as it is, this serpentine dream was not my favorite piece of the day. That honor fell instead to a much more humble creation: 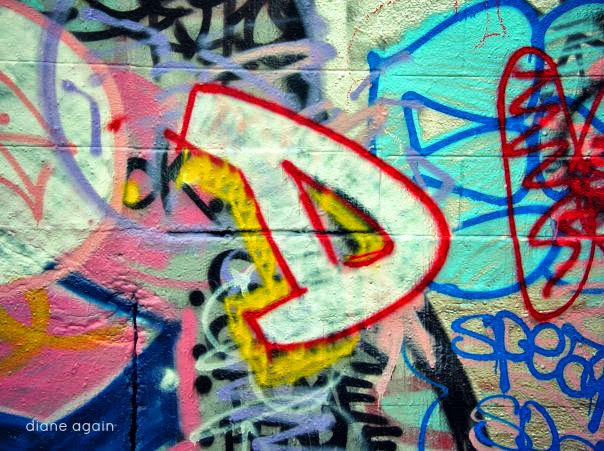 ^ Yes. A homely white D, outlined in red and blocked in yellow for a primitive dimensional effect, won my heart, hands down. But in order to understand why, you'll need to read this chat, in which I tell the whole story in elaborate detail to a very patient friend:

And I must say, it was one of the most amazing adventures of my life.
Posted by Diane Streicher @ Diane Again at 12:29 AM

Email ThisBlogThis!Share to TwitterShare to FacebookShare to Pinterest
Labels: Art and Architecture, Inspired Learning, Interesting People, Travels Near and Far