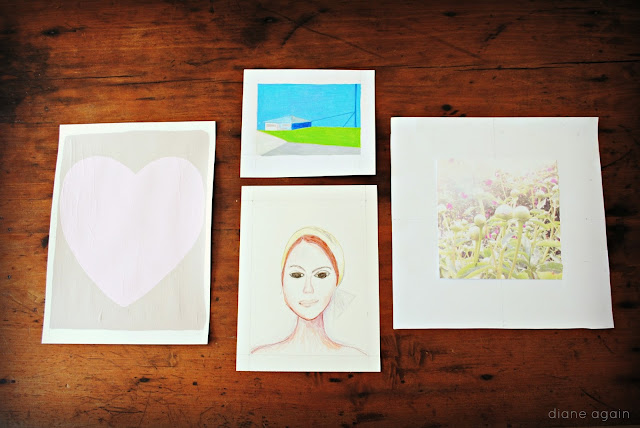 Well, at the moment, you are actually looking at four pieces of paper lying on my dining room table, but I can explain.

This story started one day in July, when my mother decided to throw out all her magazines.

She had a big backlog of several different periodicals. She was sick and tired of feeling guilty for not reading them, so she made the bold decision to just pitch them and start over. This was quite contrary to her natural OCD must-read-from-cover-to-cover mode, and I was proud of her for throwing caution to the wind and breaking her own rules.

But in her classic way, my mom decided that she had to at least thumb through each magazine to see what she was missing.

And what my mom found, buried deep in the pages of an issue of Better Homes and Gardens, was a gallery wall that set her soul on fire. 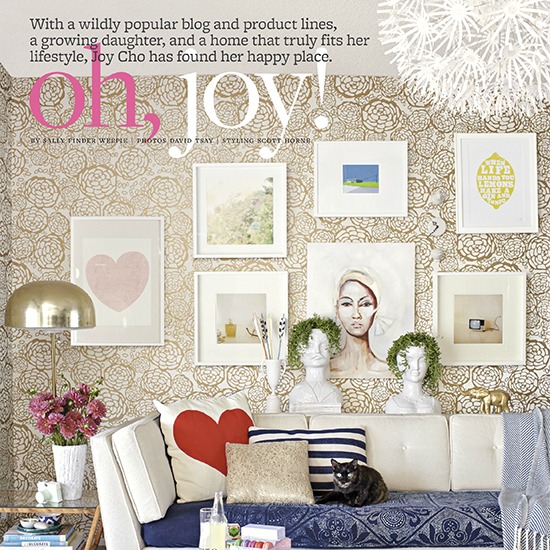 She decided, in an instant, to reproduce a smaller version of this lovely arrangement in her own home.
She went out and bought five frames, roughly proportional to the five pieces on the left side of the arrangement.
She took them home and hung them up immediately, with the factory-installed photos still behind the glass.

Then she called me and said, "I need some art."

I was flabbergasted. This is not my mother's typical behavior. While she was quite a mid-century hipster in her youth, she has long since settled down into a traditional and very understated decorating style. After moving into her current home a decade ago, and getting her few, well-chosen furnishings arranged to her liking, she hasn't changed a thing.

Yet in a flash, she was caught up in a totally post-modern graphic designer's art collection and hoping that I could find her some clones.

So I said the only thing that came into my head: I'll make you whatever you need.

Today, I shipped off to her four of the five promised pieces.

I'll admit that this project has intimidated me. Over the past month, my mom's enthusiasm for this project has not abated in the least, and I know her expectations are high. Finally, after a lot of mulling and pondering about how to approach each piece, I finally just unleashed my inhibitions and set to work. 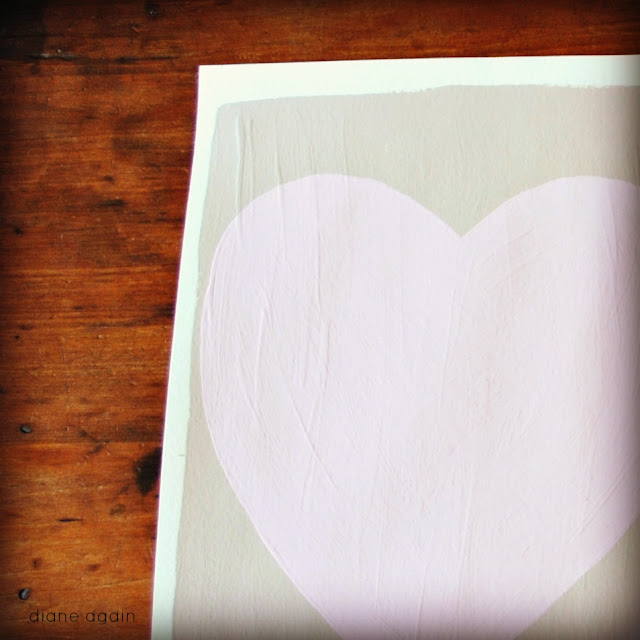 The heart was the easiest, so I did it first. A big, bold, frame-filling shape. Acrylic paints in soft, muted colors. Her frames and mats are all white, so I shifted the background shade just a bit, to play off those tones. So satisfied with the result. 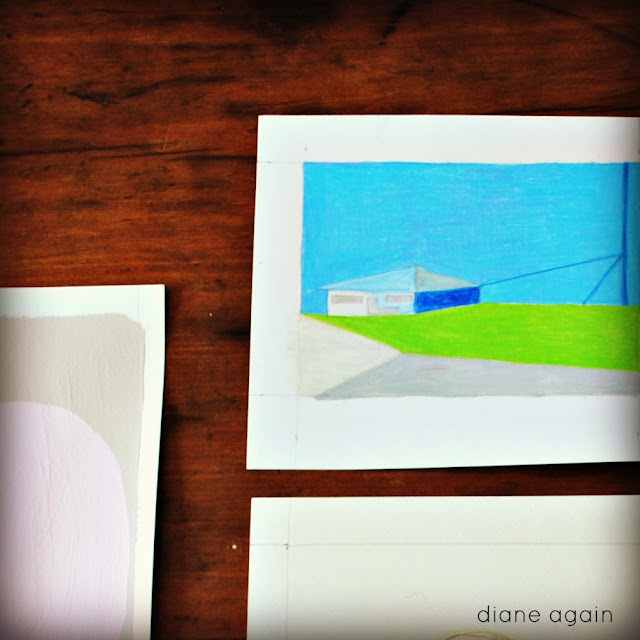 The tight geometry of this stark and colorful landscape intimidated me until I hit upon the idea of using colored pencil rather than ink. So much easier to control all those straight lines and crisp angles. 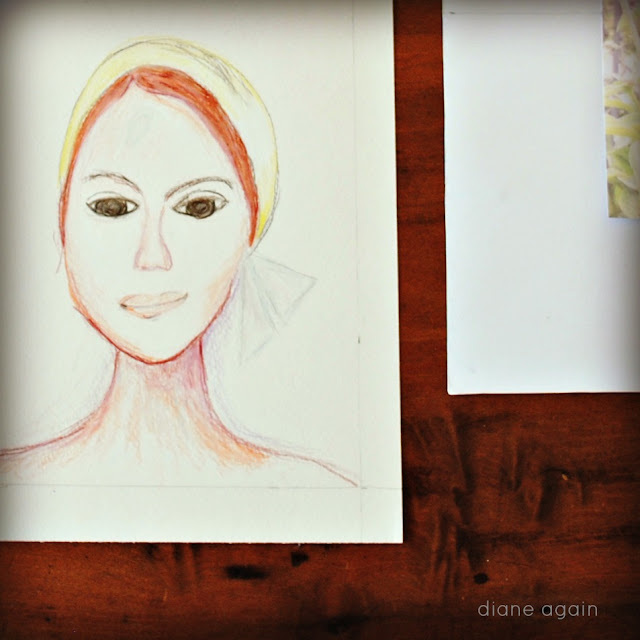 Only for my mother would I take on portraiture. Oh gosh, I have ZERO experience with figure painting but I was not about to disappoint her. Sitting in front of my blank piece of paper, I turned on an episode of House Hunters International, turned off the you-can't-do-it voices in my brain, and went to work. An hour later, I had a passable facsimile of the original piece, and when my artist daughter looked over my shoulder and advised, "Okay, stop now," I happily stopped. 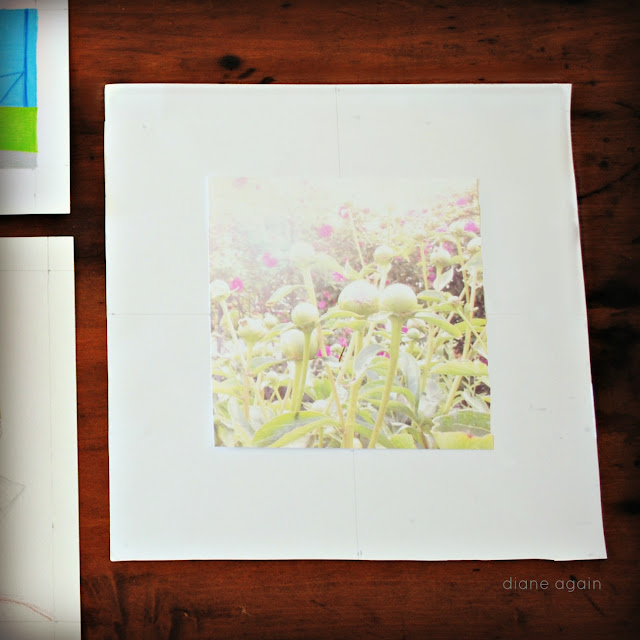 This is a photograph from my own garden. In keeping with the effect that I was attempting to recreate, I edited the original shot to wash out most of the color. Then I loaded the file on a thumb drive, and asked my husband, who was heading out to run errands, to make an oversize print for me. When he came home, he handed me the envelope and said, "The picture on the drive was all washed out, but don't worry, I fixed it for you." I tore open the envelope and sure enough, he had undone all my artsy edits. So the version of the photo shown here is actually Take Two.

Now that I'm on a roll, I'll finish the fifth piece this weekend and send it off soon. But I wanted my mom to finally fill in some of the frames on her gallery wall, and enjoy the finished effect. Don't want to keep my fashionista mother waiting.

More stories about my mom:

Four Important Things About My Mother Bear
Mid-Century Hipster
The Story Of The Stair Steps
November Rose
Does Anybody Really Know What Time It Is
White And Clean
Posted by Diane Streicher @ Diane Again at 2:14 AM