"It was a beautiful letdown when I crashed and burned,
when I found myself alone, unknown and hurt." -Jon Foreman

Any good Pacific Northwesterner knows that the San Juan Islands, prized as they are for many outdoor adventures, are especially good for one thing: whale watching. Yep, three resident pods of famous orcas call the nearby waters home, and are often seen frolicking off the west coast of San Juan Island. Prime viewing is found at Lime Kiln State Park, and after our adventures down at Cattle Point, we headed over that way.

Now, here's the thing. These orcas live on their own terms. If they want to come by the park and put on an acrobatic show in the kelp beds just offshore, that's exactly what they will do. And everyone who sees them will be charmed.

But if our clever orcas and their other marine mammal friends choose to swim off and spend their time elsewhere, there's not a darn thing that we humanoids can do about it.

Suffice it to say that a hopeful visitor to Lime Kiln is facing a crap shoot, a roll of the dice, a shot in the dark. There's no way to predict when the animals will appear, or even improve the odds of catching a glimpse of them. All an orca-loving person can do is show up and hope for the best.

So on our all-day San Juan adventure, my daughters and I showed up at Lime Kiln, and boy, were we hopeful. The glories of the sea and sky, as seen from the bluffs above the water, filled us with excitement and anticipation about what we might find. 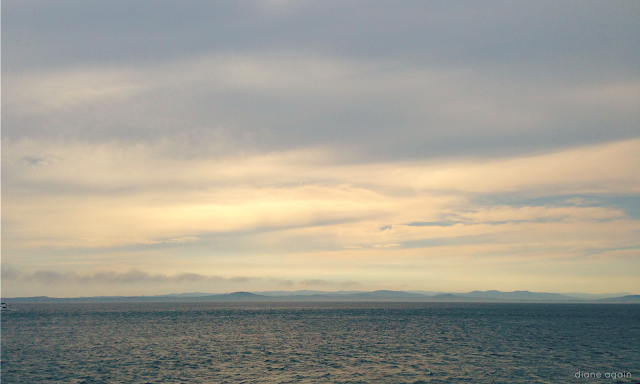 But as we directed our gaze downward at the kelp fields that lure the orcas and other beasts to this prime feeding ground, we saw....nothing. 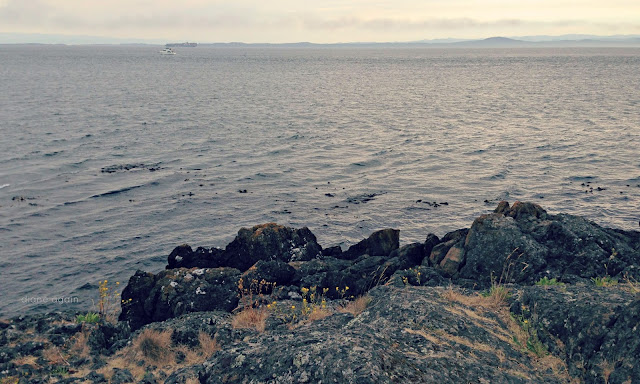 Arg. We watched and waited. We waited and watched. Still nothing.

Did I mention the arctic breezes that were robbing us of our core body heat? It was cold and windy and miserable and desolate.

But wait. As we wandered back and forth along the viewing area, desperately searching for any sign of animal life, we noticed something interesting.

A lighthouse, perched nearby on the rocky bluff, winked at us and invited us to come for a visit.

Alright. We were game. 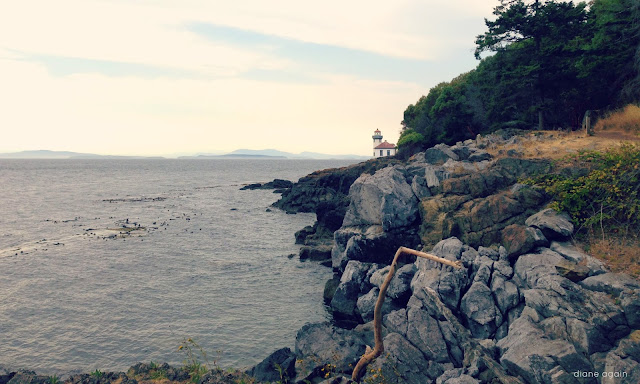 As we followed the trail wove along the headland, we were surprised and delighted to find ourselves walking among a stand of Madrona trees.

These cheerful West Coast dwellers always make me smile, with their brilliant orange-reddish bark; squiggly, sprawling habit; and long history as a source of food and medicine to the local Native Americans.

My daughters and I had a great time wandering among these beauties, snapping pics right and left, and marveling at their delicate, firey limbs. 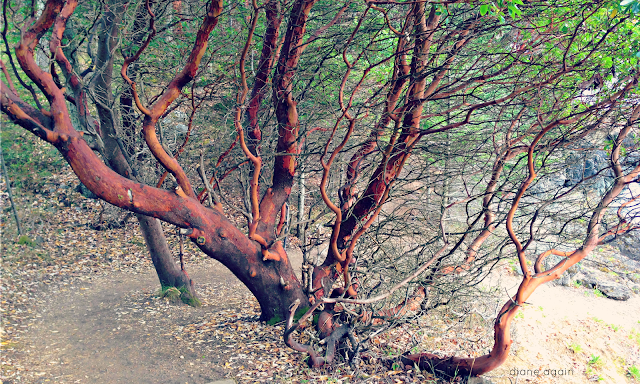 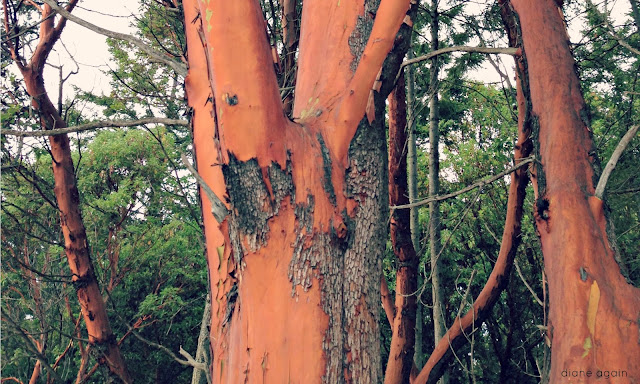 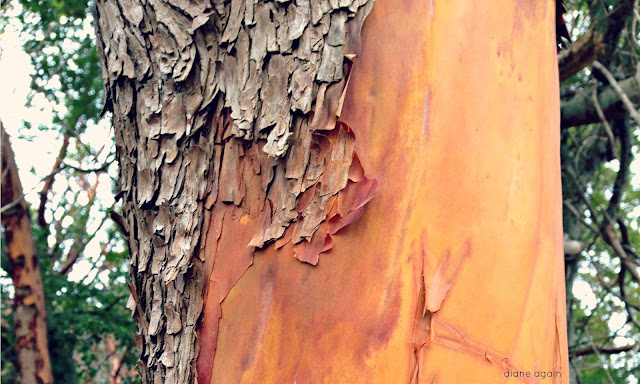 Beyond the trees, we climbed out on a big outcropping of rock, and clambered up to the flat area surrounding the lighthouse. The final steps were challenging, the view was deeply satisfying. 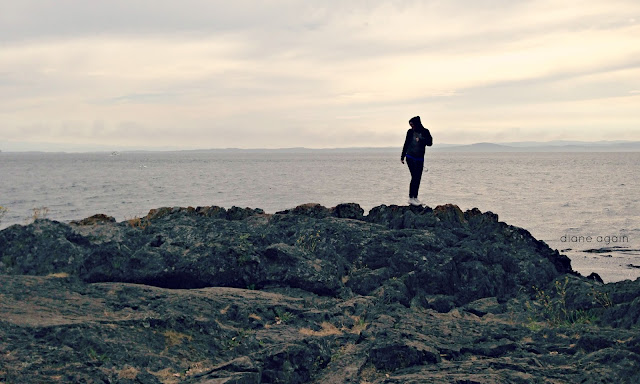 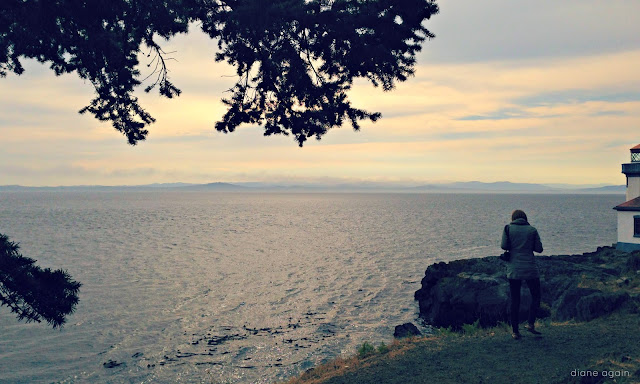 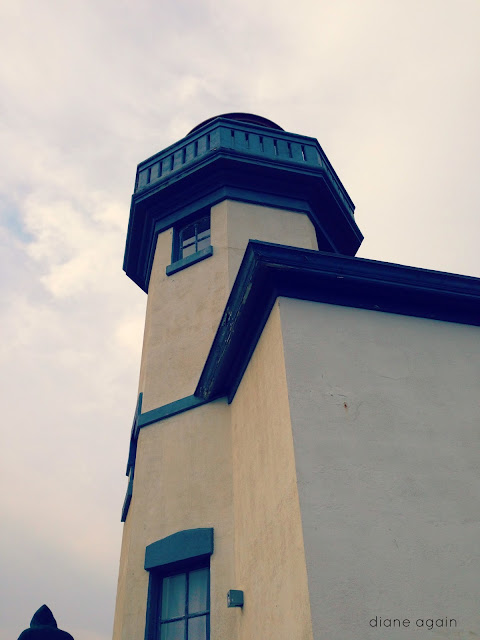 Clearly, the lighthouse had seen better days; she was worn and tired. But as we explored around the walls and peered in the windows, we found signs explaining that the old girl was scheduled for some major improvements, and that made us all feel a lot better.

We also found a sign declaring that some Minke whales had passed through just the day before. 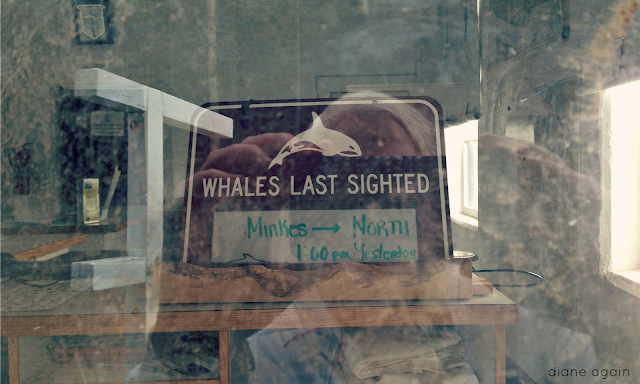 As we finished our visit to the lighthouse and marched back through the Madrona grove, we squinted and stared at the kelp fields again, one last time, in hopes of seeing some marine life.

I had really hoped to see some orcas. And I must admit, I felt very let down.

But as I hiked along, and thought about the wonders we had discovered instead, I realized what a beautiful letdown it had been. 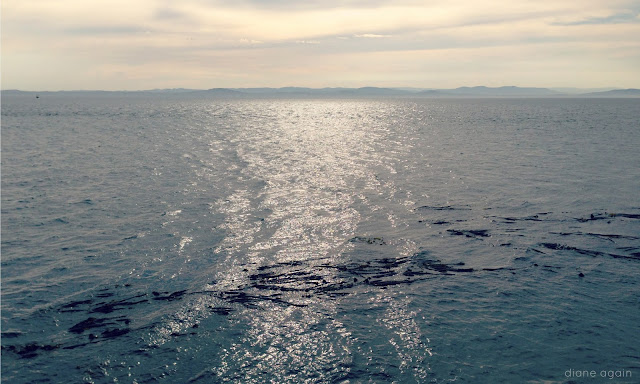 
Other stories of hope, offered from me to you:

It's Also The Thing With Feathers
Finding Your Way Home
Stopping For Poppies
Blue Skies
Down In DEE-Troit
The Importance Of Ugly Places
Cheers To Tuscon
November Rose
One White Crocus
White And Clean
Posted by Diane Streicher @ Diane Again at 2:27 AM